'We were all more or less thieves at Lant Street. But we were that kind of thief that rather eased the dodgy deed along, than did it. We could pass anything, anything at all, at speeds which would astonish you. There was only one thing, in fact, that had come and got stuck - one thing that had somehow withstood the tremendous pull of that passage - one thing that never had a price put to it. I mean of course, Me.'

This novel centres on the difference between faked and genuine wooing. In 1862 Susan, a teenage ‘fingersmith’ brought up in a Southwark thieves’ kitchen, is recruited by a gentlemanly rogue to become maid to a young heiress, Maud, who is being exploited and ill-treated by her uncle. His plan is to seduce and marry Maud and get his hands on her fortune, but there is a stunning surprise in store.

'It is a rare pleasure to discover a writer as assured as Waters'
Joan Smith, Sunday Times

'Sarah Waters is one of the best storytellers alive today.sooner or later she's going to be given the Booker'
Matt Thorne, Independent on Sunday

'This novel, whose narrative centres around the difference between faked and genuine wooing, is itself irresistibly seductive. It is 1862 and Susan, a teenage 'fingersmith brought up in a Southwark thieves kitchen, describes how she is recruited by a gentlemanly rogue to take part in a plot involving a young heiress living a nightmarish existence in a big country-house. The heiress, Maud, is being exploited and ill-treated by her uncle. (The true nature of that exploitation is revealed only much later in one of the novel's ingenious surprises.) The plan is that Susan will become Maud's maid and help the rogue to seduce her, elope with and marry her, get his hands on her fortune, and then disembarrass himself of her. Light-heartedly the girl plunges into her role in this nefarious undertaking, overcoming her scruples for a share of the fortune. All is not as it seems, however, and there is a stunning surprise in store for her and the reader. But the novel is concerned with more than just plot twists. For in spite of the adversarial roles they are playing and across the barriers of birth, education, and wealth, the two girls find they are powerfully drawn to each other. As the novel unfolds, those barriers will turn out to be illusory in various ways as the power of love - maternal as well as sexual - shows itself able to defy convention, to defeat conspiracies, to forgive wrongs and even to make possible the ultimate sacrifice. With a melodramatic situation as a metaphor for a psychological and moral conundrum and with a liberal sprinkling of plots, impersonations, madhouses, heiresses, and dramatic revelations, we are clearly in Wilkie Collins territory. That aspect of the novel is done extremely well and the narrative tension is maintained with only a slight faltering towards the end. But the author takes advantage of modern freedom to explore aspects of sexuality that a Victorian novelist could barely hint at and in doing so intriguingly illuminates a historical reality which the fiction of that period largely ignores. This is a gripping and a thought-provoking novel.' Review by Charles Palliser (Kirkus UK)

Sarah Waters was born in Wales in 1966 and lives in London. She has a Ph.D in English Literature and has lectured for the Open University. She won the Betty Trask Award for Tipping The Velvet and the Somerset Maugham Award and Sunday Times Young Writer of the Year  for Affinity. Fingersmith was shortlisted for both the Orange Prize 2002  and for the Man Booker Prize 2002, and won the CWA Historical Dagger  prize before earning her three 2003 Author of the Year awards - from the Booksellers Association, Waterstone's and The British Book Awards. Sarah Waters is also ... 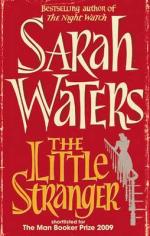 View All Books By Sarah Waters