Meet Jack Reacher.  You’ll either fall in love, or you’ll want to emulate him – he’s great.  He’s a tough, ex-military cop of no fixed address and strangely you’ll feel you need to get to know him – which is great for there are a lot of books - right up to the latest, 61 Hours, with its most extraordinary ending.  So meet Jack Reacher and then really get to know him.  Killing Floor is the first book in the phenomenal bestselling Jack Reacher series by Lee Child. It introduces Reacher for the first time, as the tough ex-military cop of no fixed abode.  Trained to think fast and act faster, he is the perfect action hero for men and women alike.

‘I fell in love with Jack Reacher as a character when I first read early material of this very first thriller by Lee Child – here was a hero for our time,  trained to think fast and act faster, a strong, silent, pragmatic and ruthless righter of wrongs who also had his tender side and was therefore equally appealing to a woman like me as he was to my male colleagues: although the proofs of every new Reacher thriller are instantly snapped up, this first book remains  a favourite of so many people at Transworld for the past fifteen years, and I can honestly say that everyone who works here takes pride in the way Lee has since broken through into the superleague of thriller writers.' Marianne Velmans, Publishing Director at Transworld

Books in The Jack Reacher Series:

Margrave is a no-account little town in Georgia.  Jack Reacher jumps off a bus and walks fourteen miles in the rain to reach it, an arbitrary detour in search of a dead guitar player.

But Margrave has just had its first homicide in thirty years. And Reacher is the only stranger in town.  So he is thrown into jail.  As the body count mounts, only one thing is for sure: They picked the wrong guy to take the fall.

Click below to listen to an extract from the audiobook edition of this title.

‘Races along, spattering blood and body parts on the way’ – Sunday Telegraph 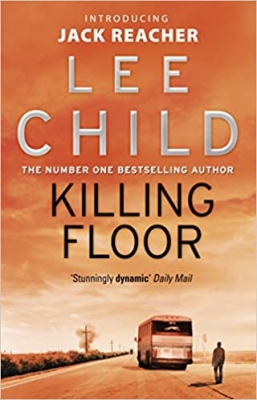