LoveReading View on Under the Eagle

Under the Eagle is a great start to a simply fabulous historical series that truly gallops along. Best-selling author Simon Scarrow really knows how to create engaging characters and ramp up the tension.

Books in The Eagle Series:

3. When the Eagle Hunts

4. The Eagle and the Wolves

7. The Eagle In The Sand

Under the Eagle Synopsis

It is AD 42, and Quintus Licinius Cato has just arrived in Germany as a new recruit to the Second Legion, the toughest in the Roman army. If adjusting to the rigours of military life isn't difficult enough for the bookish young man, he also has to contend with the disgust of his colleagues when, because of his imperial connections, he is appointed a rank above them. As second-in-command to Macro, the fearless, battle-scarred centurion who leads them, Cato has more to prove than most in the adventures that lie ahead.

Then the men discover that the army's next campaign will take them to a land of unparalleled barbarity - Britain. After the long march west, Cato and Macro undertake a special mission that will thrust them headlong into a conspiracy that threatens to topple the Emperor himself...

Under the Eagle Press Reviews

[Simon Scarrow] blends together historical facts and characters to create a book that simply cannot be put down... Highly recommended - Historical Novels Review

Gripping... ferocious and compelling, it is a story of blood, romance and sacrifice - Daily Express

Praise for Simon Scarrow: 'I really don't need this kind of competition... It's a great read' -- Bernard Cornwell - 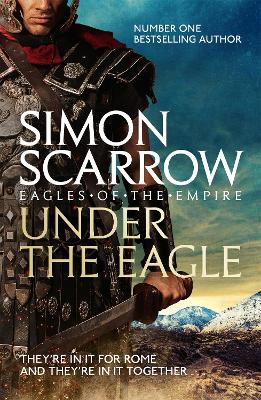