Hugely entertaining, tick. Multifaceted, tick. Intelligent, tick. Start of a new series, tick, tick, tick. Forensic psychologist Cyrus Haven investigates the death of a young champion ice-skater, while also assessing Evie. Evie is in secure care after experiencing severe trauma and she has the gift (or curse) of being able to tell when someone is lying. Chapter one hooked me, a few more chapters in and another snare caught me, raising questions, leaving me wanting more. Short, intense chapters are written either from Evie’s viewpoint or that of Cyrus. Both characters intrigued me, leaving my thoughts knocking at the door to understanding. Two stories with Cyrus acting as the link gradually twist together to create one fascinating tale. I gobbled up this book, there were surprises waiting in unexpected places, and moments of calm when I was wary. Good Girl, Bad Girl is a wow of a start to a new series that promises much indeed. Not only a book of the month, I’ve also chosen it to sit as a LoveReading star book too.

Books in The Cyrus Haven Series:

2. When She Was Good

The girl with no past.

Six years ago, Evie Cormac was discovered, filthy and half-starved, hiding in a secret room in the aftermath of a shocking crime. Now approaching adulthood, Evie is damaged, self-destructive and has never revealed her true identity.

The boy who survived.

Forensic psychologist Cyrus Haven, a man haunted by his own past, is investigating the death of champion figure-skater Jodie Sheehan. When Cyrus is called upon to assess Evie, she threatens to disrupt the case and destroy his ordered life. Because Evie has a unique and dangerous gift - she knows when someone is lying. And nobody is telling the truth. 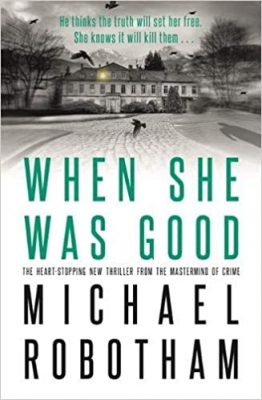