LoveReading View on The Meanest Flood

Sam Turner returns to his home town, after completing a case in Nottingham, to find storm clouds gathering and the police waiting for him. He discovers that two of his ex-wives have been killed and that he is a suspect. Sam is released on condition that he does not leave York, but he sees a pattern in the two murders and guesses that the next victim will be another of his exes, Julie. Sam rushes to Oslo, where Julie now lives, but his efforts are in vain. She too is killed.

Her murder marks out Sam as a prime suspect. He goes on the run, dodging not only the police, but the real killer, and finds himself embroiled in a terrifying mystery where he is both the fugitive and the detective, trying to anticipate the moves of the murderer and save his own skin.

'Baker's extraordinary books are much admired for thier emotional ambition, thier stylistic unusualness and their willingness to deal with unpalatable truths... they are also immensely enjoyable.' 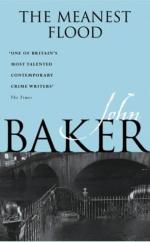 John Baker is the author of four Sam Turner novels, Poet in the Corner, Death Minus Zero and Walking With Ghosts. His latest novel is The Chinese Girl.

View All Books By John Baker