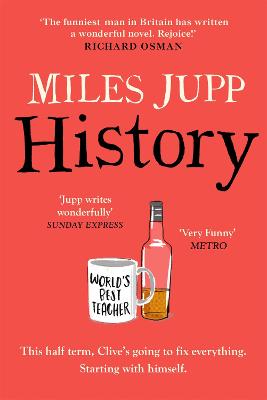 "A funny, warm-hearted, bittersweet novel in which a history teacher is driven to confront the unravelling of his life."

History, the first novel from actor, comedian and writer Miles Jupp (you’ll know him from his roles in Balamory and The Durrells, and appearances on popular comedy panel shows like Would I Lie To You?) is a funny, moving tale of modern family life and a man in the throes of midlife unravelling.

Clive is a history teacher at a private school - he moved from a comprehensive as a result of his wife wanting a more rural life for them and their two daughters. Feeling increasingly stifled by school, and generally let down by life, Clive suggests they take a half-term holiday to France just as an incident at school throws his integrity into question. Their break turns out to be anything but the tonic Clive had sought for his well-being (and his marriage). It’s peppered with funny farcical moments - torrential rain followed by sun-burn; incidents with cars and a painful bike-ride accident - and on their return, Clive is more aware than ever of the need to change how he deals with life, and his actual life, for that matter.

Underpinned by poignant realisations, Clive’s story has authentic, funny charm. If you’re aware of the author’s TV and radio persona, you’ll hear him narrating Clive’s character - a blend of hesitant, bumbling action and a realistic voice that’s both assured and endearingly rambling. Oh, and the ending is entirely surprising and leaves one desperate to know what Clive is about to do, and what path his life takes a little further down the road.

The private school he teaches at is consuming his life, no thanks to wretched headteacher Julian Crouch. The gentle country life Clive envisaged has stifled him and left his marriage on the brink. What he needs is a holiday - something to remind him and Helen what life used to be like. But when things don't go to plan, and an incident at school begins to weigh heavy on his head, Clive's life starts to unravel in front of him. Has he got it in him to turn things around, whatever the cost? After all, it's his own time he's wasting...

Wonderfully funny and often moving, this brilliant novel by star of The Durrells and Would I Lie To You? Miles Jupp is set to be the stand-out book of the summer.

The funniest man in Britain has written a wonderful novel. Rejoice! - Richard Osman

Miles Jupp is an actor, comedian and writer. He played Nigel in the BAFTA winning sitcom REV, and John Duggan in Armando Iannucci's THE THICK OF IT, and has made multiple appearances on HAVE I GOT NEWS FOR YOU, MOCK THE WEEK and WOULD I LIE TO YOU? Film appearances include THE MONUMENTS MEN, directed by and starring George Clooney, Michael Winterbottom's THE LOOK OF LOVE and MADE IN DAGENHAM. Miles has appeared on the West End stage in NEVILLE'S ISLAND and at the National Theatre in BOTH RULES FOR LIVING and PEOPLE.

As well as writing and starring in the successful BBC Radio 4 sitcom IN AND OUT OF THE KITCHEN, in 2015 he also took over from Sandi Toksvig as host of THE NEWS QUIZ.

More About Miles Jupp
Add To Wishlist
Buy from our bookstore and 25% of the cover price will be given to a school of your choice to buy more books.