This was a dream of a read for me, relatively short, different, beautifully written, and full of jarring, jolting impact. Blue Night is the first in the Chastity Riley series, was a number one bestseller in Germany, and has been fabulously translated by Rachel Ward. After a particularly difficult case (which involved in-house corruption) Chastity Riley, state prosecutor in Hamburg, has been transferred to witness protection. Chastity’s next case propels her straight back into the main ring, she has to throw her guard up and come out fighting. The introduction surprised me, raw and gritty, yet written with a lyrical beauty, it really sets the tone. Simone Buchholz shoots abrupt, short sentences across the page, her writing is sparse and to the point, yet connected deeply within my heart and mind. I adored the sections which freeze-framed the characters in time, they burst with energy and information, almost popping with intensity. It feels as though you are on a collision course with the ending, which exploded in dramatic style. Constantly surprising, Blue Night is an original, firecracker of a read, it will undoubtedly be one of my books of the year, I absolutely loved it.

Books in The Chastity Riley Series:

After convicting a superior for corruption and shooting off a gangster's crown jewels, the career of Hamburg's most hard-bitten state prosecutor, Chastity Riley, has taken a nose dive: she has been transferred to the tedium of witness protection to prevent her making any more trouble. However, when she is assigned to the case of an anonymous man lying under police guard in hospital - almost every bone in his body broken, a finger cut off, and refusing to speak in anything other than riddles - Chastity's instinct for the big, exciting case kicks in. Using all her powers of persuasion, she soon gains her charge's confidence, and finds herself on the trail to Leipzig, a new ally, and a whole heap of lethal synthetic drugs. When she discovers that a friend and former colleague is trying to bring down Hamburg's Albanian mafia kingpin single-handedly, it looks like Chas Riley's dull life on witness protection really has been short-lived...

Fresh, fiendishly fast-paced and full of devious twists and all the hard-boiled poetry and acerbic wit of the best noir, Blue Night marks the stunning start of a brilliant new crime series, from one of Germany's bestselling authors. 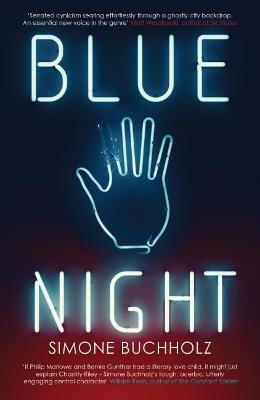