A wonderfully distinctive, intense, and piercing read. In 2014 a young woman Arla Macleod kills her family, later, as investigative journalist Scott King begins to unravel the story with podcasts on the internet, danger steps into view and stalks ever closer. The second in this fresh and different series takes a short step back in time from the first, while you can certainly read this as a standalone, I do recommend beginning with Six Stories. Matt Wesolowski excels in creating individual voices, each podcast sounded as clearly as a bell tone in my mind. I could hear each character speak, see them gesturing, I looked into their eyes and beyond, and they demanded my attention. A featherlight connection to Arla is created, which strengthens with each podcast. As the countdown to answers continued, my thoughts writhed on a jagged cliff edge, and there was only one way down. Hydra provokes thoughts and rattles feelings, creating an original and enthralling read, highly recommended.  ~ Liz Robinson

One cold November night in 2014, in a small town in the north west of England, 26-year-old Arla Macleod bludgeoned her mother, father and younger sister to death with a hammer, in an unprovoked attack known as the 'Macleod Massacre'. Now incarcerated at a medium-security mental-health institution, Arla will speak to no one but Scott King, an investigative journalist, whose Six Stories podcasts have become an internet sensation. King finds himself immersed in an increasingly complex case, interviewing five witnesses and Arla herself, as he questions whether Arla's responsibility for the massacre was a diminished as her legal team made out. As he unpicks the stories, he finds himself thrust into a world of deadly forbidden `games', online trolls, and the mysterious Black-eyed Children, whose presence extends far beyond the delusions of a murderess...

What To Read After Hydra

`A complex and subtle mystery, unfolding like dark origami to reveal the black heart inside   Michael Marshall Smith

`Wonderfully atmospheric. Matt Wesolowski is a skilled storyteller with a unique voice. Definitely one to watch'  Mari Hannah

`A remarkable debut from a fine new fictional voice. Written as a series of six podcasts, which attempt to uncover the truth about the death of young Tom Jeffries, this compelling narrative pulls you in from the start and keeps you in its grip to the bitter twisted end. A great book!'  Shelley Day

`A stunning piece of writing - chock full of atmosphere, human insight and beautiful writing. Take a note of this guy's name. He's going to be huge!'  Michael J. Malone 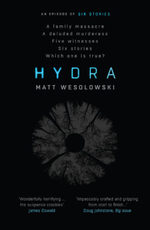