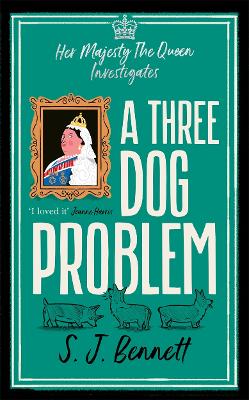 "S.J. Bennett returns with the second in her “Her Majesty, the Queen, investigates” series; a glorious, right Royal, rip-roaring rollick of a read, based on the best “what if” in recent years."

The delightfully clever mystery in which Queen Elizabeth II secretly solves a murder at Buckingham Palace - perfect for fans of The Crown and The Thursday Murder Club by Richard Osman.

Queen Elizabeth II is having a royal nightmare.

A referendum divides the nation, a tumultuous election grips the United States - and the body of a staff member is found dead beside Buckingham Palace swimming pool.

Is it a tragic accident, as the police think? Or is something more sinister going on?

As Her Majesty looks for answers, her trusted assistant, Rozie, is on the trail of a treasured painting that once hung outside the Queen's bedroom.

But when Rozie receives a threatening anonymous letter, Elizabeth knows dark forces are at work - and far too close to home. After all, though the staff and public may not realise it, she is the keenest sleuth among them. Sometimes, it takes a Queen's eye to see connections where no one else can . . .

Agatha Christie meets The Crown in A THREE DOG PROBLEM, the much-anticipated second book in the 'Her Majesty The Queen Investigates' mystery series by SJ Bennett - for fans of The Thursday Murder Club by Richard Osman, Agatha Christie and M.C. Beaton's Agatha Raisin.

PRAISE FOR THE 'HER MAJESTY THE QUEEN INVESTIGATES' MYSTERY SERIES: A witty whodunit starring our very own HM The Queen as an amateur sleuth - GOOD HOUSEKEEPING

I loved it - JOANNE HARRIS

SJ Bennett wrote several award-winning books for teenagers before turning to adult mysteries. She lives in London and has been a royal watcher for years, but is keen to stress that these are works of fiction: the Queen, to the best of her knowledge, does not secretly solve crimes.

You can find her at SJBennettBooks.com for all things crime and royal, on Instagram @sophiabennett_writer and on Twitter @sophiabennett.

More About SJ Bennett
Add To Wishlist
Buy from our bookstore and 25% of the cover price will be given to a school of your choice to buy more books.

The Murder at the Vicarage

The Dead of Winter