Winner of the Desmond Elliott Prize 2011.

If you have read books set in India, then you must add 'Saraswati Park' to your canon. If you haven't made that step feeling, perhaps, that India is a different world, far removed from your own experience and comprehension, then this is a great place to start your journey. After only two or three pages you will be transported into human thoughts and feelings that are common to your own and easy on the imagination. In fact, you will love this book. 'His shirt was crisp; it hung at a polite distance from his body'.  A tremendous first novel from an exciting young author recently chosen as one of the Telegraph's '20 under 40' best UK writers. Sheer delight.

Famous for its electric chaos, the city of Bombay also accommodates pockets of calm. In one such space works Mohan, a contemplative man who has spent his life observing people from his seat as a letter-writer outside the main post office. But Mohan's lack of engagement with the world has caused a thawing of his marriage. At this delicate moment Mohan -- and his wife, Lakshmi -- are joined at their home in Saraswati Park by their nephew, Ashish, a sexually uncertain 19-year-old who has to repeat his final year in college.

As the novel unfolds, the lives of each of the three characters are thrown into relief by the comical frustrations of family life: annoying relatives, unspoken yearnings and unheard grievances. When Lakshmi loses her only brother, she leaves Bombay for a relative's home to mourn not only the death of a sibling but also the vital force of her marriage. Ashish, meanwhile, embarks on an affair with a much richer boy in his college and, not long afterwards, succumbs to the overtures of his English tutor.

As Mohan scribbles away in the margins of the sort of books he secretly hopes to write one day, he worries about whether his wife will return, what will become of Ashish, and if he himself will ever find his own voice to write from the margins about the centre of which he will never be a part.

'The frustrations of middle-class family life are the focus of Bombay-set Saraswati Park... each character quickly feels like a familiar face, making this like The Corrections, but set in India...a treat'
ELLE

'Joseph contrasts the inner and outer lives of her characters, and the uneasy friction between new and old cultures, with all the wit and delicacy of a latter-day Mrs Gaskell'
The Times

'Joseph writes beautifully about quietness and stillness!this is a quiet, restrained novel but a great deal is going on beneath the surface'
Sunday Times

'Anjali Joseph's debut novel is replete with evocative images of Bombay!but the book's greatest strength lies in its delicate portrayal of a young man's desperation for intimate connection, and a couple's acceptance of a marriage that has failed'
Financial Times

'An elegantly realised portrait of unrequited love, frustrated aspirations and the unspoken compromises of marriage and family. Joseph neatly weaves in elements of the rapid social change occurring in the ever-expanding city but her principal concern is the more complex process of personal change and development and its bittersweet effects: the nerves, hang-ups and pains of youth and the regrets, pleasures and fulfilment of old age'
Observer

'How true to life it seems -- the background of disconsolate rains and chattering mynah birds entirely Bombay, the preoccupations universal ! a generous book where absolutes are neither sought nor found.'
Guardian

'Here is the suburban, petit bourgeois world of Bombay, seldom written about before, and with such acuity, delicacy, and intelligence, illuminated at different times of day by flashes of reflected light. This is the best debut novel I've read for a long time: admirable in its masterful ease, moving in its constant surrender to compassion and wonder'
Amit Chaudhuri 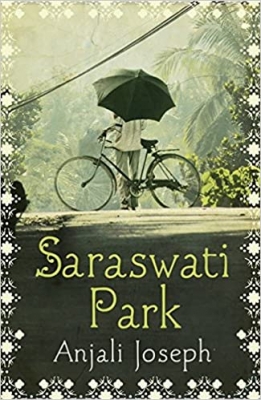 Anjali Joseph was born in Bombay in 1978. She read English at Trinity College, Cambridge, and has taught English at the Sorbonne. More recently she has written for the Times of India in Bombay and been a Commissioning Editor for ELLE (India). She graduated from the MA in Creative Writing at the University of East Anglia with distinction in 2008. Saraswati Park is her first novel.   Author photo © C J Humphries

View All Books By Anjali Joseph