Picture the Italian Alps in summer and a mixed group of canoeists going white water rafting for the first time on a glacier fed river.  Parks brilliantly portrays the disparate individuals and the river in its most dangerous poise brings out qualities and failings in the most urgent fashion, provokes sudden conflicts and unexpected shifts of alliance. An ideal love affair breaks down and an apparently impossible one timidly buds. A banal disagreement turns violent.  Rapids is alive with the drama of the water and the fragility of the people it bears along.

'Suddenly alone, you see the river's horizon come to meet you. There's a certain glassiness to it and as the roar of the rapid swells the water grows more compact, it pulls more earnestly. Above and around, the mountains are quite still. Already you are past the point of no return. You must choose your line.'In the dramatic landscape of the Italian Alps a group of English canoeists arrive for an 'introduction to white water.' Camping, eating and paddling together, six adults and nine adolescents seem set to enjoy what their leader insists on calling a 'community experience.' Their hosts are Clive, a tactiturn figure but a leader, and Michela, his fragile girlfriend. Joining the group late are Vince, a banker trying to make sense of the flotsam of his existence, and his teenage daughter whom he feels moving inexorably away from him. Vince is no natural on the water but comes to relish the exhilaration of testing himself. He feels better for it.

But the holiday cannot be entirely separated from the larger world. Rather than allowing them to forget their ordinary personalities, the dangerous river brings out qualities and failings in the most urgent fashion, provokes sudden conflicts, unexpected shifts of alliance. An ideal love affair breaks down and an apparently impossible one timidly buds.

A banal disagreement turns violent. Meanwhile, the hottest summer on record is filling the glacier-fed rivers with a melt water so wild that it is surely unwise of the distracted instructors to launch their party into the last day's descent of the upper Aurina-Rapids grippingly evokes the vertiginous thrill of entering a hostile environment, of being at the limit of control.

Tim Parks's latest novel is alive with the drama of the water and the fragility of the people it bears along. 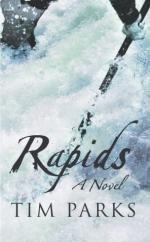 Tim Parks studied at Cambridge and Harvard. He lives near Verona with his wife and three children. His novel Europa was shortlisted for the Booker Prize.