The Haddock Flies At Midnight

LoveReading View on The Haddock Flies At Midnight

Imagine Monty Python meets Terry Pratchett and you'll have an idea of what to expect from 'The Haddock Flies at Midnight'. Keven Shevels, previously known for his walking and fell running guides to the north west of England, has given us a real comedic treat for these dark days.

The tone is set from the first page of the first chapter when the main character, Ivor Dogsbreath, conducts a conversation with the 'Arthur', who makes it abundantly clear that what he writes goes and he will write anything for a laugh. The reader can sit back and wait for his giant foot to descend and cause mayhem and humiliation to his 'hero'. Ivor is a clerk in the housing department of his town's local council and, as such, is roped in to help the local police and two MI5 information gatherers, who suspect there's a threat to security in the area. We are then introduced to a group of six Muslims, living in a council house in the same town. Their first problem to overcome is that caused by the fact that they are all called Mohammed, except for Justin. Their second is where to get the supplies they so desperately need. Equally desperate are the members of the North Yorkshire and South Durham Brotherhood of Satanists and Associated Followers of Beelzebub. Where are they going to find a virgin for their next human sacrifice in this town? And then there's Jedidiah Makepeace the Third, leader of the Church of Righteous Souls, on a mission from America to restore the faith in the town to it's former greatness. This mainly involves waging war on the local LGBT community, who meet in The Lace Bridle. Their sermonising falling on deaf ears, they are determined to get hold of guns to replace those confiscated from them at the airport to make people listen. The person all these groups turn to to provide for their needs is Cyril Edgington-Smythe and the story then proceeds to descend into glorious chaos, culminating in the 'Battle of Edwin's Bottom', where all the 'customers' turn up together to collect their spoils, watched by the SAS and Immigration officials, not to mention two owls.

This is a totally irreverent, utterly ridiculous, completely hilarious laugh out loud 'hoot' of a book that I can't recommend enough.

The Haddock Flies At Midnight Synopsis

An adult comedy that reflects true life – not a lot of sex and violence, but lots of naughty words and even more innuendos.

Thirty days in the life of a town hall housing official in the north of England. Joining forces with a femme fatale from MI5, the pair investigate the discovery of a dead Russian intelligence agent. The dead Russian seems to have been investigating an international gang that has links to terrorism, gun running and people trafficking. So why was he found dead in this quiet little town and where will the investigations take them?

Meanwhile on another side of town, the American preacher Jedidiah Makepeace and his followers pursue their mission from God, to restore the birth place of Anglo-Saxon Protestantism back to it’s rightful place and remove the influence of the worldwide conspiracy of Buddhists, Catholics, Hindus, Jews, Moslems and the bleeding-heart liberals that just love the evil of sodomy. If only it was like America and they could get their hands on some guns … then everyone would listen to them.

Meanwhile on yet another side of town, there’s an awful lot of sides to this town, the North Yorkshire and South Durham Brotherhood of Satanists and Associated Followers of Beelzebub are struggling. They need to find a virgin in time for their annual sacrifice. Unfortunately, in this small town virgins are in short supply and desperate times call for desperate measures. Cyrus Slimeball, one of the Brotherhood, just happens to have contacts that can get them a virgin, although there is an offer on and it would be cheaper to get half a dozen.

Unfortunately, as they struggle to ‘find’ their virgin, members of the Brotherhood keep experiencing strange accidents. As their numbers diminish, they seem unaware of a vendetta against them, a vendetta carried out by the Eastgate Gerbil and Hamster Breeders Society and their chairwoman Patsy Longshaft, a vendetta carried out as a punishment for past sins.

Through it all runs the exploits of an old school friend of the hero. A twenty-four stone, former professional rugby player now working as a drag queen, Big Dolly harbours an unrequited passion for Chuck, one of the American evangelical preachers and blindly pursues his love interest. Dolly also has psychopathic tendencies and can hold a grudge.

Events come to a head with the Battle of Edwin’s Bottom. Edwin’s Bottom is a meadow on the outskirts of town where the BBC Breakfast Outside Broadcasting Unit is presenting a weather forecast with star presenter Karen Churchbush. Guests for the item are the local Eastbourne Road Church, Mosque, Synagogue and Temple Gospel Choir under the musical guidance of its leader, Rabbi Moshe Patel.

Then the armed gang arrive. They are closely followed by the terrorist sleeper cell, Jedidiah Makepeace and his followers, Cyrus Slimeball looking for another virgin, the SAS, the SBS, the Metropolitan Police Counter Terrorism Unit, the local police Tactical Firearms Unit, the Immigration Service and Big Dolly.

And the owls in the town also appear to be behaving quite strangely. 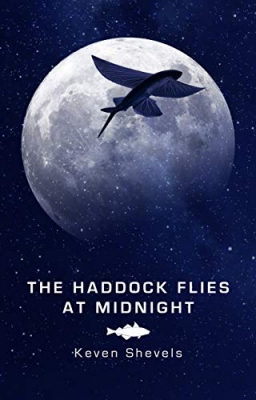 View All Books By Keven Shevels