LoveReading View on The Homeless Heart-Throb

A sweary, sexy, thought-provoking and thoroughly entertaining tale set in a Welsh town. A homeless man sits just off centre stage, though this is actually very much an ensemble piece. Individual stories, each able to exist on their own, combine to become a complete and oh so fabulous community tale. The chapter headings serve as a siren like call to read. Crystal Jeans has created fascinating and unique snapshots, some made me shout with laughter, while in others I flinched. There are some very human attributes and an awful lot of feeling to be found and explored along the way. I particularly enjoyed the apparently randomness of the time line, which zig-zags and throws thoughts skywards. The Homeless Heart-Throb is clever, different, and it just roars along as it fans the provocative flames - loved it!.

How funny! How dysfunctional. This is what it really means to be British, she thought. Everybody separate behind their walls and everybody drinking…

Dennis has been carrying a torch for Gareth Moon since school; Sez conducts a psychological experiment with himself and two jam-jars the subjects; Estela spends sultry summer afternoons observing her neighbours over the fence; Hatima searches for an errant octogenarian in the local hostelries… Each of them encounters Monsterberry Crush, the local vagrant, until snapshot by snapshot his story is told.

Set in various homes, streets, parks and a nearby residence for the demented elderly, The Homeless Heart-throb is a journey into contemporary Wales lit up with the full gamut of human relationships: platonic, romantic and sexual. 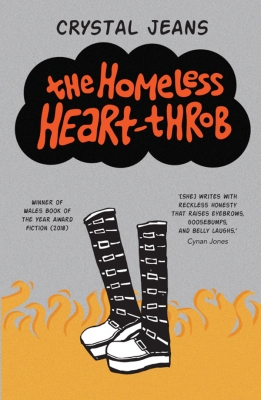 View All Books By Crystal Jeans