Gosh, this is a unique, riveting, gloriously written short novel. 17 year old Silvie and her parents are on an experimental archaeological dig site in Northumberland. Her controlling father keeps a tight rein on Silvie, yet as she experiences the freedom of the other students, her life closes in around her. Sarah Moss has created an absolutely chilling first chapter, the feeling remained with me throughout the book and I found myself on high alert. There aren’t many chapters, there are no speech marks, it is one continuous train of Silvie’s thoughts. Without realising I slipped into her mind space, almost became Silvie as her intimate thoughts merged with mine. A claustrophobic feeling settles over the pages, as each word is read, emotions intensify and fear sinks, this really is clever writing indeed. Ghost Wall may be short in length, due to the feelings it evokes, it actually feels as though it is an immense read. This fabulous, provocative and powerful book comes as highly recommended from me, it also sits as one of my picks of the month.

It is high summer in rural Northumberland. Seventeen-year-old Silvie and her parents have joined an encampment run by an archaeology professor with an interest in the region's dark history of ritual sacrifice. As Silvie finds a glimpse of new freedoms with the professor's students, her relationship with her overbearing father begins to deteriorate, until the haunting rites of the past begin to bleed into the present.

'I have never read a novel this slender that holds inside it quite so much. Wild, calm, dark yet hopeful... This book ratcheted the breath out of me so skilfully that as soon as I'd finished, the only thing I wanted was to read it again' Jessie Burton 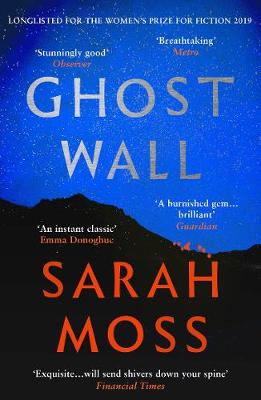 Sarah Moss was educated at Oxford University and is a senior Lecturer in Literature and Place at the Cornwall Campus of Exeter University. She spent 2009-10 as a visiting lecturer at the University of Reykavik. She co-edits, with Nicola Humble, the Food series at Manchester University Press. Night Waking is her second novel.   Author photo © Simon Burt

View All Books By Sarah Moss