A deeply affecting debut about limitations and longing, lust and devotion between a working class boy and an enigmatic older woman.

Dubliner Sonny first meets Vera while he’s helping his labourer dad work at her well-to-do Montpelier Parade house. He’s a directionless working class boy who thieves, fights and doesn’t fit in. His dad is a gambler and his mum works hard to keep their family afloat. Vera is beautiful, richer, older and English, and has no family, as far as Sonny is aware. A second chance encounter further arouses his fascination, and then she turns up at the butcher’s he works in and offers him odd job work. When Vera collapses, Sonny is the only one there to come to her rescue, while she, in turn, opens his eyes and heart to a hitherto hidden world of literature and art. Until meeting Vera, he “never had a book”, since “books were not meant for boys who cut meat”. Their relationship is evoked with sharp intensity, and a cutting awareness that this is transitory for them both. “I think years from now you’ll understand this and hate me for it”, Vera remarks as they lie in bed.

The uncommon use of a second person narrative has a mesmerising and intensifying effect. Throughout we listen in on Sonny addressing himself; lonely, drifting, struggling, with an especially moving epiphany coming when he feels “sudden emotion” for his mother and plans to buy her “something nice”. This is a tender, tense coming-of-age story, with a masterfully executed denouement. ~ Joanne Owen

The Costa Judges say: ‘A beautifully-written story about the pain and wonder of love found in unexpected places.’

Her house is on Montpelier Parade: just across town, but it might as well be a different world. Working there on the garden one Saturday with his father, Sonny is full of curiosity. Then the back door eases open and she comes down the path toward him. Vera. Chance encounters become shy arrangements, and soon Sonny is in love for the first time. Casting off his lonely life of dreams and quiet violence for this new, intoxicating encounter, he longs to know Vera, even to save her. But what is it that Vera isn't telling him?

'I hope that someone will give me and advance copy... I've heard it's lyrical, brave and inventive - everything I look for in a novel.' -- Maggie O'Farrell Observer, Book of the Year 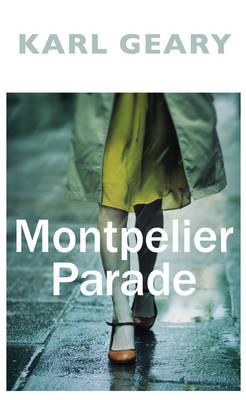 Karl Geary was born in Dublin, and moved to New York City at age sixteen. He has worked as a script writer (Coney Island Baby), and an actor (Michael Almereyda's Hamlet, and Ken Loach's Jimmy's Hall), and has adapted and directed Dorothy Parker's 'You Were Perfectly Fine' for the screen. He lives in Glasgow with his wife and daughter.

View All Books By Karl Geary