The Cthulhu Casebooks Sherlock Holmes and the Shadwell Shadows

The prolific science fiction and fantasy British author James Lovegrove switches literary roads and begins a new, promising series, The Cthulhu Casebooks in which the worlds of Conan Doyle and H.P. Lovecraft mingle to interesting effect, and Holmes and Watson will confront the weird and horrors from the depths. This is thoroughly enjoyable pulp in the grand old tradition as Watson, back from his harrowing combat experiences in Afghanistan, becomes Holmes' sidekick to investigate a series of curious deaths in London's East End, which appear linked to a sinister Oriental drug lord but soon uncover a web of worrisome connections to the supernatural and forces beyond human ken. Atmospheric, wading through London's proverbial fog, our hardy sleuths are soon confronted by abominable powers from the other side and their adventures are both momentous and joyous. Perfect entertainment in a handsome small hardcover format. ~ Maxim Jakubowski

Now this is a lot of fun. I don’t know of many authors better equipped to weave together the inventions of Arthur Conan Doyle and H.P. Lovecraft than New York Times bestseller James Lovegrove. A long-time and talented genre author he is also utterly steeped in everything Holmesian. He has a knack for recreating 19th prose and a dry wit. He really is the perfect author for this book, which will be the first of three.

In an amusing prologue Lovegrove recounts how he has been left these manuscripts by a relative of H.P. Lovecraft. The similarity between their names is not entirely coincidental, it seems. So, with questions asked and no answers given the game’s afoot and we’re in to Doctor Watson’s story.

And this story, of a nineteenth century world haunted by the Old Ones, and the vile deity Cthulhu in particular, and of Watson and Holmes’ encounters with their worshippers, is the REAL story. According to Watson, the Holmes stories we know were tales he concocted to cover the eldritch truth. And with emaciated and dried out corpses and moving shadows in Shadwell we are off on the first adventure and Lovegrove lets the doctor spin a tight and action packed tale. Lovegrove’s Holmes and Watson are perfect. If you loved the original Holmes stories, if you loved Anthony Horowitz’s recent Holmes books, if you love the cosmic horrors of Lovecraft you’ll love this. An absolute hoot. ~ Simon Spanton

The Cthulhu Casebooks Sherlock Holmes and the Shadwell Shadows Synopsis

It is the autumn of 1880, and Dr John Watson has just returned from Afghanistan. Badly injured and desperate to forget a nightmarish expedition that left him doubting his sanity, Watson is close to destitution when he meets the extraordinary Sherlock Holmes, who is investigating a series of deaths in the Shadwell district of London. Several bodies have been found, the victims appearing to have starved to death over the course of several weeks, and yet they were reported alive and well mere days before. Moreover, there are disturbing reports of creeping shadows that inspire dread in any who stray too close.Holmes deduces a connection between the deaths and a sinister drug lord who is seeking to expand his criminal empire. Yet both he and Watson are soon forced to accept that there are forces at work far more powerful than they could ever have imagined. Forces that can be summoned, if one is brave - or mad - enough to dare... 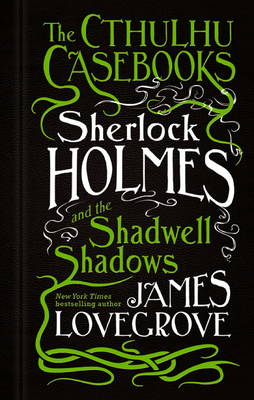 View All Books By James Lovegrove