LoveReading View on The Pre-War House

Alison Moore is an exceptional author whose writing explores the dark, unsettling and unsafe areas of everyday life. With this collection of short stories, as with her Man Booker shortlisted The Lighthouse, don’t expect cheerful redemption and sugar coated happy endings - rather powerful, affecting vignettes of other people’s lives and situations that will make you think.

Shortlisted for the East Midland's Book Award 2014 The Pre-War House and Other Stories is the debut collection from Alison Moore, whose first novel, The Lighthouse, was shortlisted for the Man Booker Prize and Specsavers National Book Awards 2012. The stories collected here range from her first prize-winning short story (which appeared in a small journal in 2000) to new and recently published work. In between, Moore's stories have been shortlisted for more than a dozen different awards including the Bridport Prize, the Fish Prize, the Lightship Flash Fiction Prize, the Manchester Fiction Prize and the Nottingham Short Story Competition. The title story won first prize in the novella category of The New Writer Prose and Poetry Prizes.

'There is an insistent, rhythmic quality to Moore's writing, and a dark imagination at work.' -- Genevieve Fox Daily Mail

'Many of the themes centre around family, relationships, loss, and uncertainty. Some of the stories create a sense of claustrophobia as the characters become trapped in situations beyond their control. Each piece has its own unique style but the thread weaving through the collection is an intangible sense of anticipation. It is a delicious read and, having read some of the stories a few times, it is something I will keep going back to. A remarkable debut collection which comes highly recommended.' -- F.C. Malby

'The level of accomplishment on display in this bleak narrative is remarkable. Moore is not, however, a beginner. She has been publishing short stories since 2000, and that apprenticeship shaped her first novel. Now she has published a collection of her stories, and it turns out to be just as uncompromising and unsettling as The Lighthouse ... Moore's distinctive voice commands exceptional power.' -- Dinah Birch The Guardian

'[A]lmost every story works beautifully and Moore is clearly a master of the short form writing. They are atmospheric, often sad and dark, and weighed down my memory. Nowhere is this more apparent than in the final story with gives the collection its title. This is a longer piece than most of the others, as a daughter sells the family home which stirs memories of a surprising life within the four, pre-war walls of the house.' The Bookbag

'Evocative and sinister, it builds relentlessly to its inevitable unwanted climax. Impressive and memorable.' -- Merric Davidson The New Writer

'It should come as no surprise that The Pre-War House is a controlled and powerful piece of prose fiction, coming as it does from an author whose debut novel features on the recently released Man Booker 2012 [shortlist].' -- Dan Powell 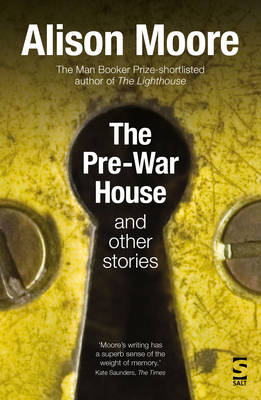 Alison Moore's first novel, The Lighthouse, was shortlisted for the Man Booker Prize and the National Book Awards (New Writer of the Year), winning the McKitterick Prize. Both The Lighthouse and her second novel, He Wants, were Observer Books of the Year. Her shorter fiction has been included in Best British Short Stories and Best British Horror anthologies, broadcast on BBC Radio 4 Extra and collected in The Pre-War House and Other Stories. Born in Manchester in 1971, she lives near Nottingham with her husband Dan and son Arthur.

View All Books By Alison Moore