Surprising, deliciously quirky and amusing, this gem of a book is one to treasure. Quite literally climbing out of his window, one hundred year old Allan disappears on an adventure, but this isn't his first. Alternating between the present and the past is extremely entertaining, nothing is lost but everything gained in discovering what makes Allan, Allan! While he is one of the most captivating characters to ever appear in print, Allan accrues some truly fascinating travelling companions. You get the feeling that Jonasson really enjoyed writing this novel and let his imagination run riotous rings onto the page. This is a book for adults of any age, with a reminder that to reach a century you are likely to have some pretty remarkable stories to tell (if not quite to this level of creativity). This is most definitely a must, must read… and once you’ve read it, The Girl Who Saved the King of Sweden should be next on your list. ~ Liz Robinson

The film version of The Hundred-year-old Man Who Climbed Out of the Window and Disappeared was released in UK cinemas on Friday 4 July 2014. Click below to view the trailer.

Sitting quietly in his room in an old people's home, Allan Karlsson is waiting for a party he doesn't want to begin. His one-hundredth birthday party to be precise. The Mayor will be there. The press will be there. But, as it turns out, Allan will not...

...Escaping (in his slippers) through his bedroom window, into the flowerbed, Allan makes his getaway. And so begins his picaresque and unlikely journey involving criminals, several murders, a suitcase full of cash, and incompetent police. As his escapades unfold, Allan's earlier life is revealed. A life in which - remarkably - he played a key role behind the scenes in some of the momentous events of the twentieth century. Translated by Roy Bradbury.

'Fast-moving and relentlessly sunny... Like Allan, the plot is pleasingly nimble and the book's endearing charm offers a happy alternative to the more familiar Nordic noir' - Guardian 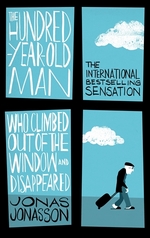 Jonas Jonasson was a journalist for the Expressen newspaper for many years. He became a media consultant and later on set up a company producing sports and events for Swedish television. He sold his company and moved abroad to work on his first novel. Jonasson now lives on the Swedish island Gotland in the Baltic Sea.   Photo credit: Sara Arnald

View All Books By Jonas Jonasson