'One of the boldest thriller writers working today' TESS GERRITSEN 'Her characters, plot, and pacing are unrivalled' MICHAEL CONNELLY _________________________________________ The fourth Will Trent novel, from the #1 bestselling author When the body of a young woman is discovered deep beneath the icy waters of Lake Grant, a note left under a rock by the shore points to suicide. But within minutes, it becomes clear that this is no suicide. It's a brutal, cold-blooded murder. All too soon, former Grant County medical examiner Sara Linton - home for Thanksgiving after a long absence - finds herself unwittingly drawn into the case. The chief suspect is desperate to see her, but when she arrives at the local police station she is met with a horrifying sight - he lies dead in his cell, the words 'Not me' scrawled across the walls. Something about his confession doesn't add up and, deeply suspicious of Lena Adams, the detective in charge, Sara immediately calls in the Georgia Bureau of Investigation. Shortly afterwards, Special Agent Will Trent is brought in from his vacation to investigate. But he is immediately confronted with a wall of silence. Grant County is a close-knit community with loyalties and ties that run deep. And the only person who can tell the truth about what really happened is dead... _________________________________________ Crime and thriller masters know there's nothing better than a little Slaughter: 'I'd follow her anywhere' GILLIAN FLYNN 'Passion, intensity, and humanity' LEE CHILD 'A writer of extraordinary talents' KATHY REICHS 'Fiction doesn't get any better than this' JEFFERY DEAVER 'A great writer at the peak of her powers' PETER JAMES 'Raw, powerful and utterly gripping' KATHRYN STOCKETT 'With heart and skill Karin Slaughter keeps you hooked from the first page until the last' CAMILLA LACKBERG 'Amongst the world's greatest and finest crime writers' YRSA SIGURDARDOTTIR 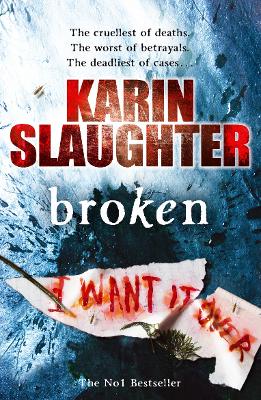 Karin Slaughter is one of the world's most popular and acclaimed storytellers. Published in 120 countries with more than 35 million copies sold across the globe, her nineteen novels include the Grant County and Will Trent books, as well as the Edgar-nominated Cop Town and the instant New York Times bestselling novels Pretty Girls, The Good Daughter, and Pieces of Her. Slaughter is the founder of the Save the Libraries project-a nonprofit organisation established to support libraries and library programming. For more information visit KarinSlaughter.com AuthorKarinSlaughter @SlaughterKarin