The film Killing Them Softly,  starring Brad Pitt, based on this crime masterpiece is due to be released in cinemas in the UK September 2012. See a trailer for it below.

Jackie Cogan doesn't advertise what he does. But when the New England mob have a mess they need cleared up, they know who to call. Markie Trattman runs a high-stakes card-game under their protection.

When the game gets raided by a couple of no-name hoodlums,  Jackie’s out of pocket. Unless of course he set up the heist himself. Either way the mob’s got a problem. To restore credibility and keep things running smooth, they need to find out who’s behind the heist – and then justice must be seen to be done. Which is where Jackie comes in. The trouble is, this is one game with lots of players, including an out-of-town hitman, a sleazy attorney, a professional dog-stealer, and enough hoods, hangers-on and high-rollers to really make Jackie earn his dough.

What To Read After Cogan's Trade 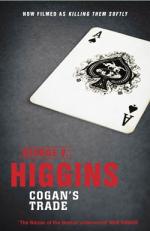 George V. Higgins was assistant DA in Boston before becoming a defense attorney and then a full-time writer. Described as ‘the Balzac of Boston’ and ‘the poet of Boston sleaze’ he wrote over thirty books, including a handful of lowlife masterpieces constructed almost entirely of pitch-perfect dialogue. He died in 1999.