LoveReading View on The Gormenghast Trilogy

Dense, ominous, strange and compelling, Peake’s masterwork defies categorization, and continues to offer new insights and perspectives at every re-reading. The story of a community steeped in ritual, living out of time, it chronicles the birth and coming of age of Titus, Earl of Gormenghast, his struggle for identity in a world of traditions that have long since become meaningless, his fight against his destiny and his eventual confrontation with his arch-rival and nemesis, the twisted, ambitious Steerpike.

Gormenghast is the vast, crumbling castle to which the seventy-seventh Earl, Titus Groan, is lord and heir. Titus is expected to rule this gothic labyrinth of turrets and dungeons, and his eccentric and wayward subjects, according to strict age-old rituals, but things are changing in the castle. Titus must contend with treachery, manipulation and murder as well as his own longing for a life beyond the castle walls.

This epic trilogy centring on Titus, 77th Earl of Groan and heir to the delapidated castle of Gormenghast, is an imaginative tour de force. The novels are peopled with a host of memorable characters such as Titus's sister Fuchsia and the crafty Steerpike, while the shadowy, monstrous castle itself surrounded by the mud huts of the 'outer dwellings
are brilliantly created. These gothic fantasy novels were written between 1946 and 1959, and British author Peake also provided the evocative illustrations. (Kirkus UK) 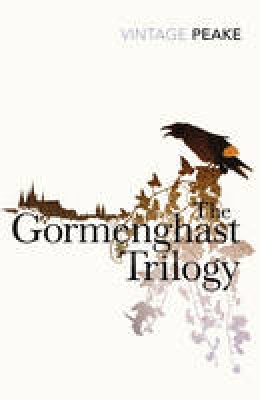 Mervyn Peake was born in 1911. He is perhaps most famous for the 'Gormenghast' trilogy which were published between 1946 and 1959 - Titus Groan, Gormenghast and Titus Alone. He has also written a book for children, Captain Slaughterboard Drops Anchor and several volumes of poetry. He was also a gifted book illustrator. He died in 1968.

View All Books By Mervyn Peake