Described by the author as an homage to Charles Dickens but also an incredibly well researched and re-imagined, gripping Victorian murder mystery based on his classic Bleak House. Where Dickens just hinted at Lynn Shepherd immerses you in a grim London underworld in which girls as young as ten work the night as prostitutes, unwanted babies are ruthlessly disposed of, and those who threaten the rank and reputations of great men are eliminated at once, and without remorse.

London, 1850. Fog in the air and filth in the streets, from the rat-infested graveyard of Tom-All-Alone's to the elegant chambers in Lincoln's Inn Fields, where the formidable lawyer Edward Tulkinghorn has powerful clients to protect, and a deadly secret to hide.

Only that secret is now under threat from a shadowy and unseen adversary - an adversary who must be tracked down at all costs, before it's too late. Who better for such a task than young Charles Maddox? Unfairly dismissed from the police force, Charles is struggling to establish himself as a private detective. Only business is slow and his one case a dead end, so when Tulkinghorn offers a handsome price for an apparently simple job Charles is unable to resist. But as he soon discovers, nothing here is what it seems. An assignment that starts with anonymous letters leads soon to a brutal murder, as the investigation lures Charles ever deeper into the terrible darkness Tulkinghorn will stop at nothing to conceal.

Lynn Shepherd lives near Oxford, with her husband. She studied English at Oxford in the 1980s, and went back to do a doctorate in 2003. In between she spent 15 years in business, first in the City, and later in PR and has been a professional copywriter for the last ten years. She published her first novel Murder at Mansfield Park in 2010. Find out more on www.lynn-shepherd.com. 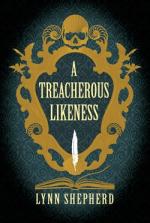 View All Books By Lynn Shepherd