Celebrated novelist Francisco Goldman married a beautiful young writer named Aura Estrada in a romantic Mexican hacienda in the summer of 2005. The month before their second anniversary, during a long-awaited holiday, Aura broke her neck while body surfing. Francisco, blamed for Aura's death by her family and blaming himself, wanted to die, too. But instead he wrote Say Her Name, a novel chronicling his great love and unspeakable loss, tracking the stages of grief when pure love gives way to bottomless pain. Suddenly a widower, Goldman collects everything he can about his wife, hungry to keep Aura alive with every memory. From her childhood and university days in Mexico City with her fiercely devoted mother to her studies at Columbia University, through their newlywed years in New York City and travels to Mexico and Europe - and always through the prism of her gifted writings - Goldman seeks her essence and grieves her loss. Humour leavens the pain as he lives through the madness of utter grief and creates a living portrait of a love as joyous and playful as it is deep and profound. Say Her Name is a love story, a bold inquiry into destiny and accountability, and a tribute to Aura - who she was and who she would have been.

What To Read After Say Her Name

"Say Her Name is a tender and sacred narrative, many-angled, fearless, incandescent in its frankness. As I read it, I felt I were reading something more alive than life itself, and thought this is surely why one reads, why one writes: that one might mingle oneself with a beloved person, a book, a landscape, and hold it… utterly alive.” — Kiran Desai

“Francisco Goldman tells us that in ‘descending into memory like Orpheus’ he hopes he might ‘bring Aura out alive for a moment.’ But in the act of writing, Goldman transcends the constraints of myth, and achieves nothing short of the impossible. Page by page, by the breath of his own words, Say Her Name restores Aura from shade to flesh, and returns her, unforgettably and permanently, to our world.” — Jhumpa Lahiri 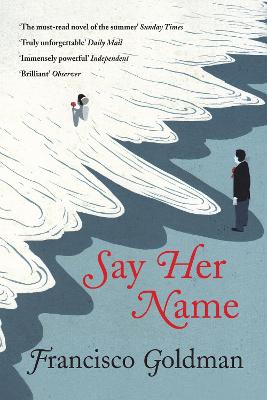 Francisco Goldman is the author of four books--three works of fiction (The Long Night of White Chickens, The Ordinary Seaman, and The Divine Husband) and one work of non-fiction, The Art of Political Murder. His first novel, The Long Night of White Chickens, was awarded the Sue Kaufman Prize for first fiction from the American Academy of Arts and Letters.  The Ordinary Seaman, his second novel, was a finalist for the International IMPAC-Dublin Literary Award and the Los Angeles Times Book Prize in Fiction. The Art of Political Murder was a New York Times 100 Notable Book of 2007 and a ...

View All Books By Francisco Goldman