Part of the Gollancz S.F. Series

A pacy and frightening story of revenge from beyond the grave. Ozzie-like rock star Jude, buys a ghost over the internet, and a heap of trouble along with it. What starts as a quirky haunting quickly grows into a terrifying chase across America as Jude and his girlfriend run for their lives from the horrible spectre pursuing them. If you like a suspenseful scare to keep you up all night, this is for you.

'Buy my stepfather's ghost' read the e-mail. So Jude did. He bought it, in the shape of the dead man's suit, delivered in a heart-shaped box, because he wanted it: because his fans ate up that kind of story. It was perfect for his collection: the genuine skulls and the bones, the real honest-to-God snuff movie, the occult books and all the rest of the paraphanalia that goes along with his kind of hard/goth rock. But the rest of his collection doesn't make the house feel cold. The bones don't make the dogs bark; the movie doesn't make Jude feel as if he's being watched. And none of the artefacts bring a vengeful old ghost with black scribbles over his eyes out of the shadows to chase Jude out of his home, and make him run for his life ...

What To Read After Heart-Shaped Box

"While the novel's occult elements are horrific enough, the true horror is the very human cycle of abuse, as victim becomes victimiser. And the redemption is achieved without recourse to sentimentality." Eric Brown, GUARDIAN

"The slick sensory prose, snappy dialogue and a handful of spooky creative touches amount to a well packaged box of tricks. A satisfying box of Black Magic." Stuart Weightman, STARBURST

"Hill's debut novel is as assured a debut novel as I have ever read, regardless of genre. Heart-Shaped Box, itself an entertaining and superb novel, offers hints of a great writing career to come." SFFWORLD.COM 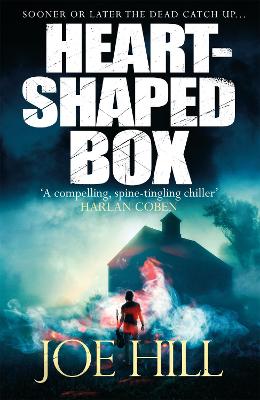