LoveReading View on Cross-dressed to Kill

Crossed-Dressed to Kill is an incredibly interesting book filled with instances from the 17th century onwards of women who dressed as men in order to go to war. Some of the names of these women were known to me, Anne Bonny the 18th century Pirate for one, however this book gave me more insight into their history, and there were many other women who I was introduced to for the first time. This is a fascinating side of history with the author’s detailed research shining a spotlight on the women who defied their gender roles in order to participate in military action.

The account of each woman is detailed, although brief, this means you could happily flick through the pages, reading about a couple of brave women at a time, or read cover to cover. At the end of each account there is a concluding summary, which not only rounds our each story but highlights some of the patriarchal views of the time.

Some of these stories are more sad than others, but all are incredibly interesting with plenty of references included at the end of the book to allow for personal research and further reading. I never enjoyed History at school, but as an adult I love learning about the past and I think that stories like these should be shared in schools, at the very least to demonstrate that the old-fashioned notion of the “traditional” role of women, didn’t work even at the height of it’s popularity.

‘Cross-dressed to Kill’ is a collection of extraordinary stories by women cross-dressers of English, Irish, French, Prussian, Russian, Spanish, American and Israeli nationalities. Describing how and why hundreds of young women dressed as men to fight as soldiers in the 17th to 20th centuries. Fearless, ‘tomboys’ and decidedly full of ‘pluck and spunk’, they watched their fathers, husbands and brothers head off to war, before breaking free from domesticity and joining the army too. Answering questions about their sexuality, were they lesbians or transsexuals? There are the intimate details of how they kept their disguise for so long and their sex secret; plus their ‘affairs’ with women while masquerading as men. Are they early feminists? They certainly crossed the gender line, risking prosecution for cross-dressing was a crime and faced jail, whippings and execution. Once discovered and their stories told, royalty applauded and rewarded their actions, the public packed theatres to see them, but not all found fame and glory. Many were killed in combat. Read their first-hand stories of revolution and war, travelling to the fields of Flanders, the West Indies and India to fight for their country- as sailors, soldiers and pirates too. Would you have dared do what they did? Read in the Appendix the roll call of so many inspiring women from around the world, once forgotten but now remembered. 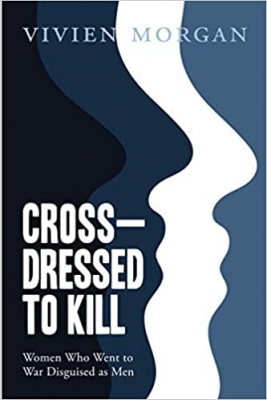 View All Books By Vivien Morgan