Wynn and Jack have been best friends since their first day of college, brought together by their shared love the great outdoors.

The adventure of a lifetime

When they decide to canoe down the Maskwa River in northern Canada, they anticipate the ultimate wilderness experience: no phones, no fellow travellers, no way of going back.

But as a wildfire starts to make its way towards them, their trip becomes a desperate race for survival. And when a man suddenly appears, claiming his wife has vanished, the fight against the raging flames becomes a much deadlier game of cat and mouse.

This story of a battle for survival will drag you off your sofa and plunge you down foaming white water rapids in a fragile canoe. It's a high adventure - the kind you seldom come across anymore - laced with a thriller twist for an extra kick ... The author's a whitewater kayaker and his descriptions of wild sailing and observations of the wilderness are lyrically poetic. Loved it! -- Alex Gordon - Evening Telegraph

Surprising and irresistible. - Booklist (starred review) on THE DOG STARS

Ravishing. . . The supreme pleasure of this book is the lovely writing. . . The pages of The Dog Stars are damp with grief for what is lost and can never be recovered. But there are moments of unexpected happiness, of real human interaction, infused with love and hope, like the twinkling of a star we might wish upon, which makes this end-of-the-world novel more like a rapturous beginning. . . . Remarkable. - San Francisco Chronicle on THE DOG STARS

The Dog Stars by Peter Heller is a heavenly book, a stellar achievement by a debut novelist that manages to combine sparkling prose with truly memorable, shining, characters. It contains all of the lyricism of Cormac McCarthy at his best. - New York Journal of Books on THE DOG STARS

In The Dog Stars, Peter Heller serves up an insightful account of physical, mental, and spiritual survival unfolded in dramatic and often lyrical. - Boston Globe on THE DOG STARS

[The Dog Stars] gripped me-it's the real deal. One of those books that makes you happy for literature. - Junot Diaz, Wall Street Journal on THE DOG STARS

Magical and life-affirming. - Guardian on THE DOG STARS

A dreamy, post-apocalyptic love letter to things of beauty, big and small. - Gillian Flynn on THE DOG STARS

Heller once again chronicles life-or-death adventure with empathy for the natural world and the characters who people it. He writes most mightily of the boys' friendship and their beloved, uncompromising wilderness, depicting those layers of life that lie far beyond what is more commonly seen. - Booklist

Suspenseful... With its evocative descriptions of nature's splendour and brutality, Heller's novel beautifully depicts the powers that can drive humans apart - and those that compel them to return repeatedly to one another - Publishers Weekly

Two college friends' leisurely river trek becomes an ordeal of fire and human malice... Heller confidently manages a host of tensions... and his pacing is masterful as well, briskly but calmly capturing the scenery in slower moments, then running full-throttle and shifting to barrelling prose when danger is imminent... Fresh and affecting... An exhilarating tale delivered with the pace of a thriller and the wisdom of a grizzled nature guide - Kirkus (Starred Review)

Masterly paced and artfully told, The River is a page-turner that demands the reader slow down and relish the sheer poetry of the language... Through stories of man versus nature date back to the Odyssey, The River thrills as Heller invites his characters to confront their own mortality without losing sight of the deep connections between humans and their environment. - BookPage (starred review)

Unless we are very lucky, someone is going to die, one of the adventurers in Peter Heller's new novel says. Like his last book, The Dog Stars, The River is a beauty-of-nature/cruelty-of-humanity hybrid, but this time he leans into the thriller aspect of the tale, with gripping results... Heller has created indelible characters in Wynn and Jake. - Star Tribune

Heller writes with deep respect and empathy for not only nature and its inhabitants but also of human frailty, friendship, loyalty, and love. This exquisite book made me feel so many things-terror, sorrow, excitement-and isn't that what it's all about? Heller packs a ton of adventure and emotion in this short novel, and I dare you to put it down once you've picked it up. Stunning, beautiful, life-affirming, and heartbreaking. What else can I say? - Criminal Element

A fiery tour de force... [The River] recalls his debut, The Dog Stars, with its poetic, staccato sentences and masterfully crafted prose... The story itself resembles a trip down a river-some parts are peaceful and allow for quiet introspection and big, deep breaths. But then you hit the rapids and the danger and risk jump off the page, forcing a sense of urgency. In those thrilling parts, reading required self-discipline. I wanted to know what happened so badly that I'd read too fast and had to retrace my steps to savor Heller's storytelling. And what a story he tells... I could not put this book down. It truly was terrifying and unutterably beautiful. - Denver Post

Poetic and unnerving... The River is a slim book - just over 250 pages - but it is full of rushing life and profound consequences. Every move Jack and Wynn make along the river has the chance to kill them or those they're trying to save, and the result is a novel that sweeps you away, each page filled with wonder and awe for a natural world we can quantify with science but can rarely predict with emotion. - USA Today

This story of a battle for survival will drag you off your sofa and plunge you down foaming white water rapids in a fragile canoe. It's a high adventure - the kind you seldom come across anymore - laced with a thriller twist for an extra kick ... The author's a whitewater kayaker and his descriptions of wild sailing and observations of the wilderness are lyrically poetic. Loved it! -- Alex Gordon - Peterborough Telegraph

Heller is a master of suspense, and his fourth novel showcases this brilliantly. A thrilling read with a dramatic twist at the end: you will not be able to put it down... or go canoeing for quite a long time -- Helen Gumley-Mason - THE LADY

A must read. - Daily Express

Utter joy... A suspenseful tale told with glorious drama and lyrical flair... The real delight is the nature writing. The River is a fiction addition to the New Landscape writing of Robert Macfarlane and Rebecca Solnit, prose so vivid and engaging that a city-dwelling reviewer can feel the clammy cold of a fog over a river or the heat of subterranean tree roots burning underfoot in the aftermath of a fire... We can feel the sharpness of the rocks and the trilling excitement of the river as it approaches rapids. - Denise Mina, New York Times

The gorgeously lyrical prose is worth savouring - but the superbly mounting tension tempts you to race on. A great adventure story and love letter to male friendship, with a wonderful depiction of the wilderness and superb characterisation. Impossible to put down, or forget -- Deirdre O'Brien - Sunday Mirror

A simple but brilliantly effective set-up, a kind of neo-Western set in a lawless world, although Peter Heller, having established the tension that drives this compulsive thriller, makes time to lyrically explore the natural landscape... An inventive rites-of-passage tale and a haunting exploration of grace under pressure - Irish Times

Heller is a master of suspense, and his fourth novel showcases this brilliantly. A thrilling read with a dramatic twist at the end: you will not be able to put it down. - The Lady

Where Heller really scores is the extraordinarily high quality of his writing about the natural world, which is lyrical and action-packed by turns -- Laura Wilson - Guardian

The danger in Peter Heller's The River is so vast and so deadly that it dwarfs more human threats... Both beautifully written, a crisp, ice-cold immersion in the glory of the wilderness, and unbearably tense, as peril moves in on Heller gratifyingly competent explorers, whose deep friendship is tenderly evoked -- Alison Flood - Observer 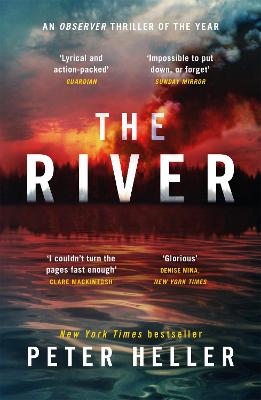 Peter Heller is an award-winning adventure writer and contributing editor on Outside magazine, Men's Journal, and National Geographic Adventure. He is also the author of several non-fiction books, including Kook; The Whale Warriors; and Hell or High Water: Surviving Tibet's Tsangpo Gorge. He lives in Denver, Colorado.

View All Books By Peter Heller