LoveReading View on The Royal Secret

A fabulously pacy, clever, and entertaining historical crime novel packed full of plots and skulduggery. James is asked to investigate a suspicious death while architect Cat finds herself in the middle of a royal secret. This is the fifth book in the highly recommended James Marwood and Cat Lovett series which began so explosively with The Ashes of London. It is such a brilliant set of books that I recommend starting at the beginning even though this could easily be read as a standalone. The intimacy of the story between Cat and James slips so easily into the history and intrigue of King Charles II. I always enjoy following the two stories of the main characters as they gradually merge together. In the third book James held the stage, here Cat takes more of a turn in the spotlight. The sense of time and place just sings, I didn’t question my surroundings, I was there. Andrew Taylor skilfully constructs a number of plot lines which he spins and twists together, the historical note at the end cements this fascinating story in place. The Royal Secret confirms this series as a must-read for any fans of historical crime fiction.

From the No.1 bestselling author of The Last Protector and The Ashes of London comes the next book in the phenomenally successful series following James Marwood and Cat Lovett during the time of King Charles II.

Meanwhile, architect Cat Hakesby is working for a merchant who lives on Slaughter Street, where the air smells of blood and a captive Barbary lion prowls the stables. Then a prestigious new commission arrives. Cat must design a Poultry House for the woman that the King loves most in all the world.

Unbeknownst to all, at the heart of this lies a royal secret so explosive that it could not only rip apart England but change the entire face of Europe...

Praise for The Last Protector:

'There is colour, violence, devotion, courage and fun here. What more could anyone ask of a crime novel?' Literary Review

'Taylor is on reliably good form in this fourth instalment of a series that effortlessly blends history and mystery.' The Times

'A teeming London (in the process of reconstruction after the Great Fire), political chicanery, duels, brothels, court manoeuvrings - all are grist to Taylor's imaginative mill' The Financial Times

'Superb... Cat, especially, remains one of the most compelling, multifaceted characters in contemporary historical fiction'. Observer

'Taylor's fourth Marwood tale is gripping and rich in detail - 4.5 stars' The Sun

'Boasting political intrigue and evocative period atmosphere, The Last Protector is crime writing at its most elegant and assured' Waterstones blog 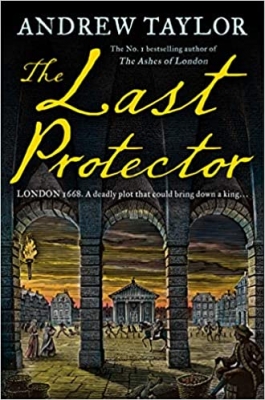