A stunning combination of horror, fantasy, thriller and gross-out humour The Pilo Family Circus is truly unlike anything else. It has been compared by reviewers to the work of Chuck Palahniuk, David Lynch, Stephen King and H.P. Lovecraft, but Will Elliott is a new writer with a style unlike any other.

The Pilo Family Circus is recruiting and whether he likes it or not Jamie is auditioning. He never dreamed of running away to join the circus, but you just don't say no to a troupe of exuberantly sadistic clowns out headhunting.

Darkly funny and gleefully macabre, The Pilo Family circus follows Jamie's furious descent into the nightmare world of a centuries-old carnival where amid the acrobats, clowns, dwarves, freaks and fortune tellers, you may lose more than just your way...

This book follows Jamie's furious descent into the nightmare world of a centuries-old carnival where you may lose more than just your way. 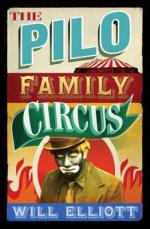 Will Elliott was a struggling 27-year-old writer who had lived modestly for the past four years in order to focus his energies on writing. He wrote five manuscripts during this period and was on the brink of giving up on his writing career, when he entered the ABC Fiction Award and won the $10,000 prize. He lives in Brisbane, Australia.

More About Will Elliot