LoveReading View on Girl, Woman, Other

This is an astounding novel telling the stories of twelve characters living across the country and through the years.

Each character is vivid as they take centre stage to share their story with us. Whether it's the sassy, argumentative Yazz, or the devastating narratives of Carole and Dominique.

This book is filled with humour, culture and passion and I think it is a must-read for everyone. Composed as poetic prose, Bernadine Evaristo's lyricism throughout makes the sections flow, hammers home key points and gives each character their own unique tone. This is a book that will stop you in your tracks as you find out more about the characters but will also stop you reading as you contemplate the beauty in Evaristo's style of writing.

This is Britain as you've never read it.

This is Britain as it has never been told.

From Newcastle to Cornwall, from the birth of the twentieth century to the teens of the twenty-first, Girl, Woman, Other follows a cast of twelve characters on their personal journeys through this country and the last hundred years. They're each looking for something - a shared past, an unexpected future, a place to call home, somewhere to fit in, a lover, a missed mother, a lost father, even just a touch of hope . . .

My favorite book of 2019 . . . the most absorbing book I read all year. This novel is a master class in storytelling. It is absolutely unforgettable. When I turned the final page, I felt the ache of having to leave the world Evaristo created but I also felt the excitement of getting to read the book all over again. It should have won the Booker alone. It deserves all the awards and then some. -- Roxanne Gay A warm, humorous and ambitious novel, and one that is enjoyably playful in style. It is both a product of its time and unlike any book ever written about Britain - Economist

Such a satisfying read, funny and true, the characters are so real you feel you know them already -- Miranda Sawyer via Twitter Threads together the diverse life stories of 12 black British women in ways that deliberately resist categorisation - Metro

'Girl, Woman, Other is about struggle, but it is also about love, joy and imagination. - Guardian

With this rich composition, Evaristo deserves a toast - Literary Review

Evaristo's prose hums with life as characters seem to step off the page fully formed. At turns funny and sad, tender and true, this book deserves to win awards - Red

Exuberant, bursting at the seams in delightful ways... Evaristo continues to expand and enhance our literary canon. If you want to understand modern day Britain, this is the writer to read - New Statesman

Weaves through time and space with crackling originality - Vogue

Beautifully interwoven stories of identity, race, womanhood, and the realities of modern Britain. The characters are so vivid, the writing is beautiful and it brims with humanity. -- Nicola Sturgeon via Twitter - 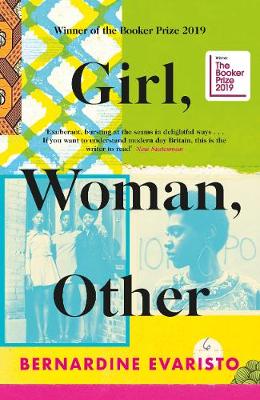