by Various, edited by Maxim Jakubowski

Crime and mystery aficionado Maxim Jakubowski has gathered 17 short stories from an oh so talented bunch of writers for your reading pleasure. In his introduction, Maxim explains that each author has offered: “a brand new story to celebrate the genre, irrespective of theme, period, or style… every one came up trumps with a tale that epitomises their storytelling talent”. Shall I tease you by saying a new Jack Reacher story features, or let you know that authors from the US, UK, France and Israel have contributed? I love anthologies and just adored Invisible Blood. I threw caution to the wind, let the book open where it wanted, and jumped in. I found and adored the stories from some of my favourite authors. I met a couple of new writers, whose words really connected, and left me wanting more. I particularly love a satisfying short story, there really is nothing like that intense burst of gratifying pleasure. So, if you need a crime and mystery fix, look no further, as Maxim himself says: “we are experiencing a Golden Age of crime and mystery writing”. Invisible Blood slips so easily into being one of my picks of the month, I was absolutely wowed by it!

Open the files on an anthology of seventeen new crime stories to probe the brutal and complex hearts of criminals, and unravel the strangest of mysteries. Watch as a secretive group of intelligence community officers trace Jack Reacher through Heathrow in Lee Child's "Smile". In Mary Hoffman's "Fallen Woman", a journalist on the trail of a secretive drug lord gets caught up in the violent suicide of a young woman in Siena. And in Jeffrey Deaver's "Connecting the Dots", detectives follow the trail of clues in the brutal killing of a homeless man, wherever it may lead... Invisible Blood is a gripping collection exploring the compulsions of the criminal mind. 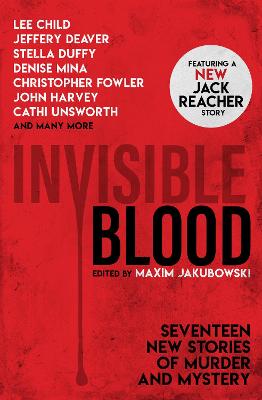 About Various, edited by Maxim Jakubowski