Of everyone in her complicated family, Eva was closest to her grandfather: a charismatic painter - and a keeper of secrets. So when he dies, she's hit by a greater loss - of the questions he never answered, and the past he never shared.

It's then she finds the letter from the Jewish Museum in Berlin. They have uncovered the testimony he gave after his forced labour service in Hungary, which took him to the death camps and then to England as a refugee. This is how he survived.

But there is a deeper story that Eva will unravel - of how her grandfather learnt to live afterwards. As she confronts the lies that have haunted her family, their identity shifts and her own takes shape. The testament is in her hands.

Kim Sherwood's extraordinary first novel is a powerful statement of intent. Beautifully written, moving and hopeful, it crosses the tidemark where the third generation meets the first, finding a new language to express love, legacy and our place within history.

Impeccably researched. Sherwood explores memory, identity, survivor's guilt and loss with tremendous acuity. Her skilful interweaving of fact and fiction is impressive and various plot twists keep us guessing until the final pages. Love, in its various forms, is threaded through the novelas a redemptive force. Countless novels depict the horrors of the Holocaust and yet Sherwood's treatment feels original. Given the rise of the far right in Hungary, it is particularly timely. -- Lucy Popescu - New Humanist

Sherwood's prose, poetic and brutal . . . A brilliant debut and an important piece of literature. -- Lyndsy Spence - The Lady

A thing of beauty . . . Where Kim Sherwood will really see you undone is in the small acts of kindness that are candles held against a storm. Those were the moments I had to lower the page and take a breath . . .There are so many lines in this book that stay with you - Van is Reading

Interwoven with the darkness Sherwood dropped little glimmers of hope, of redemption and of love . . . Sherwood's writing is immersive and compelling, filled with emotion and poignancy and I defy anyone not to be affected by the words that they read. Stunning -- Amanda Duncan - My Bookish Blog

Startling, raw and intense, this is a novel which compels you to read it, almost daring you in its quiet delivery, to look away. It is unputdownable and it is beautiful. - Literature Works

Testament unspools in dual narratives - the scarifying past, from Joseph's perspective, and the ripples across time and place it causes in Eva's present. A sensitive and searching novel about Holocaust survivors and their families, it scales a mountain of repressed emotion and feels drawn from life. -- Cameron Woodhead - Sydney Morning Herald

A rare thing - could easily be a third or fourth novel, so fluidly and gorgeously does it read. Sherwood's characters are finely nuanced and her poetic prose is every bit as exquisite . . . Stunning -- Clare Mulley - Skinny

Every now and then there is a first novel that stops you in your tracks. Testament is one such. It enters dangerous territory - the Holocaust - but does so not only with humanity but a startling control of language, images which surprise and stay in the mind. There is a search at its heart to understand the life of a man but equally to comprehend a past whose echoes still reverberate in private lives, still have the power to disturb public equanimity and challenge the writer. Here is a novelist born whole and entire. - Christopher Bigsby, author of Remembering and Imagining the Holocaust

In her astonishingly assured debut novel, Kim Sherwood explores how we remake ourselves and learn to live with the secrets of the past. But she also reminds us that every portrait of British people is a portrait of the world. A moving, elegant meditation on identity and the masks we must all sometimes wear. - Christopher Fowler

Testament is a masterfully composed and ambitious novel that really grips its reader - intense, full of hard-researched detail and vivid, original language. It is a remarkable first book that avoids the trap of many Holocaust books by understanding the idea of responsibility beyond the original trauma. - George Szirtes, poet and International Man Booker Prize-winning translator of The World Goes On

A remarkably powerful, moving, assured and beautiful novel heralding the debut of a major writer. I couldn't be more impressed. - Robert Drewe, author of Swimming to the Moon

Testament is ambitious, beautiful and brave. A vital act of remembrance of the Holocaust, it's also a deeply involving story that reaches across generations to speak to our own troubled times. How many debuts are actually important? This one is. - Polly Clark, author of Larchfield

I am absorbed by the delicacy, even the beauty, with which she writes of the trauma of history . . . It's a real pleasure to see Sherwood approaching this theme - to do with how we discover, read, and reread our past - with subtlety, playfulness, and elegiac sadness. - Amit Chaudhuri, Best Books of 2017, Open Magazine

An extraordinary book; sad but optimistic, that enshrines the human spirit.I was so moved by the way it shows blessed creativity thriving even in the depths of hell - Patrick Gale

Sherwood writes with a beauty and bravery that befits Holocaust remembrance and honours the strength of the human spirit. - Press Association

What is exceptional about Kim Sherwood's compassionate, poetic and deeply researched novel, is the way she interweaves the twisted threads of his story . . . Sherwood has taken on the major tragedy of the 20th century with a psychological insight rare in a writer who is not yet 30 . . . Unbearably poignant -- Gloria Tessler - Jewish Chronicle

What a writer. I was totally captivated. A compelling, moving and ultimately uplifting story that delivered on its promise to fill the void left by loss. - Heather Morris, author of The Tattooist of Auschwitz

Kim Sherwood's poetic fiction looks at history's impact and the morality of forgetting . . . Her writing is elegant and highly effective. This novel explores big ideas - some of the biggest ideas there are - but its power as a work of fiction lies in the personal . . . Sherwood pulls the threads of her narrative together with great skill to deliver a sad and beautiful book. -- Kathleen MacMahon - Irish Times

Achingly powerful, Sherwood's impossibly beautiful prose captivated me from first page to last. Testament tells a fractured history as if it were an intimate memory. A work I won't soon forget - Guy Gunaratne, Booker-prize longlisted author of In Our Mad and Furious City

An important and beautifully written novel by a young writer of immense talent. I was deeply moved. - Andrew Miller, author of Pure and Now We Shall Be Entirely Free 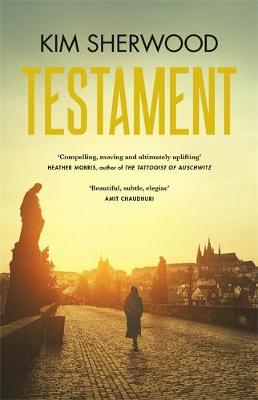 Kim Sherwood was born in Camden in 1989 and lives in Bath. She studied Creative Writing at UEA, is now Senior Lecturer at the University of the West of England, and teaches prisoners. Her pieces have appeared in Mslexia, Lighthouse, and Going Down Swinging. Kim began researching and writing Testament, her first novel, after her grandfather, the actor George Baker, passed away and her grandmother began to talk about her experiences as a Holocaust Survivor for the first time. It won the 2016 Bath Novel Award. Photo Credit: Rosie Sherwood

View All Books By Kim Sherwood