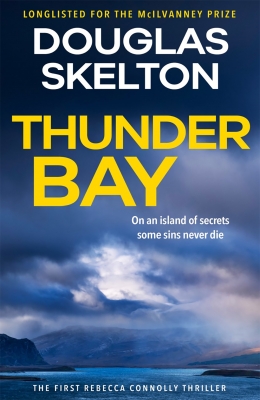 A dynamic and compelling tale following reporter Rebecca as she chases a 15-year-old murder to an island hidden in secrets.

A thrilling and compelling tale that sits in the centre of a community bound by time and common purpose. Reporter Rebecca Connolly chases a 15-year-old story of murder to an island full of secrets and closed whispered ways. The prologue really hit me with hammer hard precision, full of power and emotion, it released questions buzzing into my mind. Douglas Skelton sets a host of characters, and therefore suspects into play and yet it is easy to get to know the islanders, to feel the effects of the close-knit community. While the murder squats brooding, waiting to be solved, the island life continues and fills the pages with purpose and intent, consequently, this story just feels so incredibly real. I sank into the tale and while drama is never too far away, the authenticity of the sea, the landscape, and the ways of the island surrounded me. Although this is a fictional island, I still want to visit, and that is due to the effect of the descriptive writing on display. Thunder Bay is a dynamic read, full of the wild and loaded with secrets, it is a fabulously gripping story.

When reporter Rebecca Connolly is told of Roddie Drummond's return to the island of Stoirm she senses a story. Fifteen years before he was charged with the murder of his lover, Mhairi. When he was found Not Proven, Roddie left the island and no one, apart from his sister, knew where he was or what he was doing. Now he has returned for his mother's funeral - and it will spark an explosion of hatred, bitterness and violence. Defying her editor's wishes, Rebecca joins forces with local photographer Chazz Wymark to dig into the secrets surrounding Mhairi's death, and her mysterious last words of Thunder Bay, the secluded spot on the west coast of the island where, according to local lore, the souls of the dead set off into the after life. When another murder takes place, and the severe weather that gives the island its name hits, she is ideally placed to uncover the truth about what happened that night fifteen years before.

What To Read After Thunder Bay

'[Skelton has] taken well to fiction, skilfully building up the atmosphere, developing the characters and keeping the unexpected twists coming along' - The Herald

'Immersive, compelling and shot through with Skelton's pitch-black humour, Thunder Bay will reverberate like the last echoes of a storm long after you read the draw-dropping climax' -- Neil Broadfoot 'The risks Skelton took in creating Thunder Bay have paid off in spades. As well as creating a sympathetic new protagonist, he has crafted an emotionally truthful tale and delivered it in a lyrical style that places him among Scotland's top cadre of crime writers' - -- Louise Fairbairn - Scotsman

'Skelton has produced an evocative, beautiful and tense tapestry of a read that will undoubtedly stand the test of time' -- Mary Picken - Live and Deadly

'Dark, brooding, atmospheric and full of mystery, this is a book I would highly recommend you read. I loved it' -- Jen Lucas - Jen Med's Book Reviews

'Douglas Skelton excels at planting little seeds throughout his writing, drawing the reader in, and ensuring that they pull up a chair and watch them grow. He succeeds in intriguing you and keeping you firmly on your seat until the last page is turned' -- Sharon Bairden - Chapter In My Life blog

'A gripping and thrilling read from one of the great Scottish crime writers, themes of crime, mystery, secrecy and loyalty all woven together to make Thunder Bay one of those books that will stay with you long after you've turned the last page.' -- Kate Noble - The Quiet Knitter

'It's beautifully written, descriptive and atmospheric. The pacing is perfect, and the conclusion unexpected. Douglas Skelton has delivered possibly his best work yet, and that really is saying something! It's a triumph' -- Suze Clarke Morris - Simply Suze Reviews

'keeps you guessing, luring you page after page to conclusions and thinking you worked it out when no, no you really didn't... this is my first dance with Skelton, it won't be my last' - AlwaysReading.net

'An enthralling thriller that pulls you along at a cracking pace. A thoroughly enjoyable read that we'd highly recommend' - Undiscovered Scotland

'Skelton builds up the suspense before going in for the kill. A particularly gripping thriller' - Herald