When I Hit You: Or, A Portrait of the Writer as a Young Wife

LoveReading View on When I Hit You: Or, A Portrait of the Writer as a Young Wife

“I am the woman who asked for tenderness and was raped in return. I am the woman who has done her sentence. I am the woman who still believes, broken-heartedly in love”, so states the unnamed protagonist, an educated young woman whose every freedom is curtailed when she marries a university professor. Her silencing begins immediately, when they move to “a strange town that does not speak any of her mother tongues” and he begins to control every aspect of her life. “Come off Facebook”, he orders. When she dares question him, the punch line is dealt: if she loves him, she will do as he asks. Soon after, he takes control of her email account too, and she makes herself blank, plain, for plainness “will prevent arguments”. She tells her parents, but the shame of a broken marriage must be avoided above all else, even though he rapes to disable her, even though her abuse and isolation is all consuming. But, while he ridicules her writing, and accuses her of being mad, she writes in secret as an act of defiance, and she has a hidden weapon in her arsenal.

Stylistically, at times this put me in mind of the brilliant Jean Rhys. The writing is precise, intense, brutally honest, and analytical, and the unforgettable narrator reveals truths that need to be told, gives voice to thousands of women who need to be heard. Courageous and clever, this offers incomparably powerful insights into the manifold means by which men abuse women, and the complex dynamics of abusive relationships.

When I Hit You: Or, A Portrait of the Writer as a Young Wife Synopsis

Coming with giant grass-roots support and extraordinary critical acclaim, When I Hit You has moved readers to laughter, to anger, to tears... and to action.Caught in the hook of love, a young woman marries a dashing university professor. She moves to a rain-washed coastal town to be with him, but behind closed doors she discovers that her perfect husband is a perfect monster. As he sets about battering her into obedience and as her family pressures her to stay in the marriage, she swears to fight back - a resistance that will either kill her or set her free.Guardian's Best Books of 2017Daily Telegraph's Best Books of 2017

When I Hit You: Or, A Portrait of the Writer as a Young Wife Press Reviews

Explosive * Guardian * Urgent * Financial Times * Courageous and brave and disturbing and will stay with you for a long time * Stylist * One of the most important and shocking and poetic books of 2017 * Readwomen * Fierce and unforgettable * Culturefly * Brilliant... Astonishing... By far the best read of the year * Women Writers * This book is so so good. One of the best of the year * Nikesh Shukla * 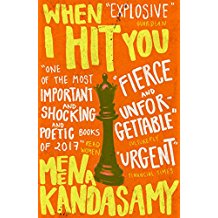 Meena Kandasamy (born 1984) is a poet, fiction writer, translator and activist who is based in Chennai, Tamil Nadu, India. She has published two collections of poetry, Touch (2006) and Ms. Militancy (2010), and the critically acclaimed novel, Gypsy Goddess.www.meenakandasamy.com

View All Books By Meena Kandasamy