A whole series of impressive endorsements leads one to believe this to be a highly suspenseful thriller when actually it is a well-written, character led drama, an excellent “set up” for a new  American detective series.  Our hero, Detective Ben Wade, ex of LAPD Homicide, has moved to quieter territory in the hope of saving his marriage.  He fails, it hurts.  From a damaged youth he now hunts those more damaged than himself, assisted by a woman also with secrets in her past.  There is a strangler on the loose but it is a paedophile who dominates most of our detective’s attention.  The dual plot, laced with lots of family drama and police procedure, meshes nicely together in a slow build.  A fascinating tale.  ~ Sarah Broadhurst

Southern California, 1986. Detective Ben Wade has returned to his hometown in search of a quieter life and to try to save his marriage. Suddenly the community, with its peaceful streets and neighbourly concerns, finds itself at the mercy of a serial killer who slips through windows and screen doors at night, shattering illusions of safety. As Ben and forensic specialist Natasha Betencourt struggle to stay one step ahead of the killer - and deal with painful episodes in the past - Ben's own world is rocked again by violence. He must decide how far he is willing to go, and Natasha how much she is willing to risk, to rescue the town from a psychotic murderer and a long-buried secret.With eerie, chilling prose, Alan Drew brings us into the treacherous underbelly of a suburban California town in this brilliant novel of suspense; the story of a man, and a community, confronted with the heart of human darkness.

Wonderfully imagined and wonderfully written, patient but propulsive, serious but suspenseful, grown-up but gripping, Shadow Man is everything a great thriller should be. * Lee Child *

Shadow Man is smart, chilling, and impossible to put down, an accomplished thriller by a writer to watch. Alan Drew is a rising star, blending suspense and humanity with consummate style. -- William Landay * Author of Defending Jacob *

Shadow Man revises the old detective story and turns it in several fascinating directions. Alan Drew writes with precision, subtlety, and a streak of suspense that does not often color the literary novel. * Colum McCann *

Part murder mystery, part family drama, Alan Drew's Shadow Man has everything I like in a novel: grit, heart, and nail-biting suspense. It's the sort of magically absorbing novel that keeps you turning the pages and checking the locks on the door. -- Lauren Grodstein * author of A Friend of the Family *

Excellent, atmospheric . . . [a] superb police procedural . . . [Ben Wade] is but one of many sharply etched characters who help make Shadow Man a stellar achievement, a book that unspools like a dark-toned movie in the reader's mind. * The Wall Street Journal *

In Alan Drew's electric new novel, Southern California in the 1980s is so palpable it is almost a character of its own, lucid and relevant. His main character, Detective Ben Wade, is an outsize but knowable force, up there with Marlowe and Jake Gittes. Shadow Man is an enrapturing read from its start to its unpredictable, enthralling finish. -- Daniel Torday * Author of The Last Flight of Poxl West *

Always thrilling and often terrifying, Shadow Man is a descendent of Chandler's The Big Sleep. Underlying the grisly dangers of Drew's novel is the forceful honesty of all good California noir, the necessary and clear-eyed exploration of the innate human truths that should and do scare us. * Claire Vaye Watkins * 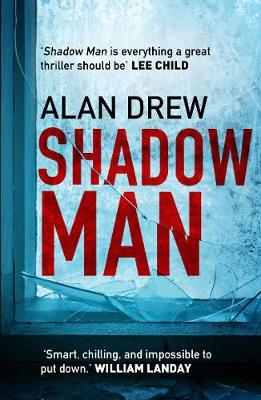 Alan Drew is the author of Shadow Man, a literary thriller. His critically acclaimed debut novel, Gardens of Water, has been translated into ten languages and published in nearly two-dozen countries. He is a graduate of the Iowa Writers' Workshop, where he was awarded a Teaching/Writing Fellowship. An Associate Professor of English at Villanova University where he directs the creative writing program, he lives near Philadelphia with his wife and two children. Learn more about his books at www.alan-drew.com.

View All Books By Alan Drew