This is a near future, post Brexit, political-cum-business thriller where Britain is seeking strong trade deals outside Europe.  The protagonist, or so we initially believe, is Kate Thompson, a new, charming and good looking Tory trade minister who is sent to India just as war looks likely between India and Pakistan.  She falls for (true love?) the chief of an Indian arms technology company which a UK electronic parts manufacturer is doing big business with.  That company employs a lot of Muslims.  Now the Indian/Pakistan problem overflows to the British factory workers who are influenced by Muslim extremists.  Then a dirty American company steps in.  Corruption leaks off the pages, intrigue and explosives situations abound; all is very action-packed.  It is a good plot idea and a most enjoyable read. ~ Sarah Broadhurst

Kate Thompson - glamorous housewife-turned-MP - surprises everyone with her meteoric rise at Westminster. When Kate is sent as a trade minister to India, she hopes it will be her moment to shine. But, embroiled in a personal scandal, she gets drawn into a dangerous world of corruption and political intrigue...

Billionaire Deepak Parrikar - head of an Indian arms technology company - is magnetically drawn to the beautiful British minister. But while their relationship deepens, India's hostilities with Pakistan reach boiling point, causing more than just business and politics to collide. In the race to prevent disaster, can their conflicting loyalties survive being tested to the limit?

Open Arms is an explosive thriller which circles from Whitehall to the slums of Mumbai. Cable's sweeping tale combines unrivalled political detail with international intrigue, desire, and the quest for power. An electrifying debut.

What To Read After Open Arms 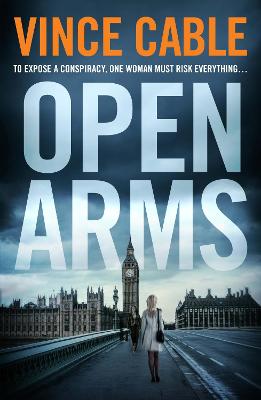 Vince Cable is MP for Twickenham, and also served from 1997-2015. He was the Liberal Democrat's chief economic spokesperson from 2003-2010, having previously served as Chief Economist for Shell from 1995-1997. He was Business Secretary under the Coalition Government from 2010-2015. Cable has published three non-fiction books with Atlantic to critical acclaim: Free Radical, The Storm, and After the Storm. Open Arms is his debut novel.

View All Books By Vince Cable