For the Most Beautiful

LoveReading View on For the Most Beautiful

The story of the Trojan War told by two of its most important, yet often overlooked, characters: Briseis, the slave girl Agamemnon and Achilles fought over, and Krisayis (Shakespeare’s Cressida) promised to the Gods but lover of a prince. Also very present are the Gods themselves, playing with lives, betting on battles and arguing amongst themselves. It is a well-known tale, moving, frightening, bloody. This re-telling shows a feminine side, away from the battles but still dependent on their outcome. It is an engrossing world, easy to fall into. As spies, lovers, slaves and prophets these women of Troy show themselves the equal of the more famous men. Even if you know the story well this is still an entrancing read.

For the Most Beautiful Synopsis

Three thousand years ago a war took place that gave birth to legends - to Achilles, the greatest of the Greeks, and Hector, prince of Troy. It was a war that shook the very foundations of the world. But what if there was more to this epic conflict? What if there was another, hidden tale of the Trojan War? Now is the time for the women of Troy to tell their story. Thrillingly imagined and startlingly original, For the Most Beautiful reveals the true story of true for the first time. The story of Krisayis, daughter of the Trojans' High Priest, and of Briseis, princess of Pedasus, who fight to determine the fate of a city and its people in this ancient time of mischievous gods and mythic heroes. In this novel full of passion and revenge, loyalty and betrayal, bravery and sacrifice, Emily Hauser breathes exhilarating new life into one of the greatest legends of all - in a tale that has waited millennia to be told. 'Brings ancient Troy wildly, raucously, passionately alive' Manda Scott, author of Boudica.

For the Most Beautiful Reader Reviews

For the Most Beautiful Press Reviews

'Once in a while something comes along that's so utterly right, so necessary for now, that you wonder why nobody thought of it before. Emily Hauser's stunning debut novel ... brings ancient Troy wildly, raucously, passionately alive and tells at last the stories of those who really mattered.' -- MANDA SCOTT, bestselling author of Boudica and Into the Fire

'A feast for the senses, richly described and effortlessly easy to read. It brings to life an ancient world long gone, and in so doing reminds us of the traumas and costs of war, which are sadly still so much a part of our world today.' -- MICHAEL SCOTT, presenter of Rome's Invisible City

'A delight from start to finish. Hauser's fresh perspective on one of the great archetypal epics, in focusing on the marginalised women's stories, makes for fascinating reading ... a clever premise and a thoroughly enjoyable.' -- ELIZABETH FREMANTLE, author of Sisters of Treason

'A brilliant re-imagining of the Iliad, faithful to the original yet completely accessible ... the two young women at the centre of the drama are faithfully representative of their time and place yet feel compellingly contemporary ... Emily Hauser has given us a lively new take on a classic.' -- TERRY HAWKINS, author of The Rage of Achilles 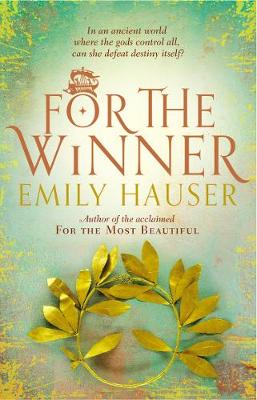