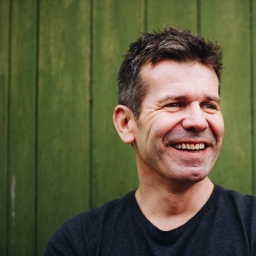 Finbar Hawkins is a graduate of the Bath Spa MA in Writing for Young People. He grew up in Blackheath, London and now lives in Wiltshire with his family, in a landscape steeped in myth and legend. He is a creative director for Aardman Animations in Bristol, where he makes fun interactive things for children of all ages.

A gobble-it-up fiery and intense yet thoughtful debut novel about family, betrayal, and witchcraft. Opening the pathway to a fabulous historical fantasy series this calls out as a must-read for young adults. Set during the civil war in 17th century England, 15 year old Evey has to flee with her little sister Dill when her mother is murdered. As with all good young adult novels, it is perfectly easy to slide into and really enjoy as an adult too, particularly with the wonderful cover drawing you in. Touching history, it flies into fantasy, as author Finbar Hawkins examines the meaning of witch. Evey is a complex character and as she tells her own story she has the ability of self-reflection, even if she doesn’t always like what she sees. Witch is a read that fair on crackles with energy, it also encourages thoughts to both consider and soar and deservedly sits as one of our LoveReading debuts of the month.

Other books by Finbar Hawkins

Set in the 17th century, a breathtaking debut, and a potential prize-winner, about the power of women, witchcraft, fury, revenge and the ties that bind us. After witnessing the brutal murder of her mother by witch-hunters, Evey vows to avenge her and track down the killers. Fury burns in her bright and strong. But she has promised her mother that she will keep Dill, her little sister, safe. As the lust for blood and retribution rises to fever pitch, will Evey keep true to the bonds of sisterhood and to the magick that is her destiny? Praise for Witch: 'A story that captures sibling rivalry so perfectly and tells its tale so beautifully I didn't want it to finish' JASBINDER BILAN 'Raw, mystical and beautifully told. A striking debut' KIRSTY APPLEBAUM 'Witch grips you in its spell from first page to last. As fierce, beautiful and thrilling as a bird of prey in flight' JONATHAN STROUD 'A book filled with enchantment, in every sense. Dark, exciting and pacy, Witch brilliantly balances magic and realism' ANTHONY McGOWAN