THE TIMES THRILLER OF THE MONTH 'Vivid and packed with journalistic lore ... Mixing pulsating derring-do with painstaking detective work' Sunday Times A Bangladeshi camp. A British ambassador. A Harley Street doctor. Investigative journalist Casey Benedict is used to working on stories that will take her from the bottom to the top of society - stories with a huge human cost. And her latest case is no different. A frantic message is found hidden in clothes manufactured for the British high street. They take the girls... Casey and her team at the Post know they are on the brink of a major expose but identifying the factories in which the clothes have been made is one challenge, following the trail of those taken is another. Their attempts to find the girls will take Casey from her London newsroom across the world and into the very heart of families who will be destroyed if what she uncovers is ever revealed.

Casey is fierce, obsessive and brilliant. Watt, herself an investigative journalist, provides a daunting insight into what the job entails as Casey blackmails and tricks her way to the truth -- Alison Flood * Observer, Thrillers of the Month * No second album syndrome for Watt; her follow-up to her debut is just as vivid and packed with journalistic lore, and just as adroit in mixing pulsating derring-do with painstaking detective work * Sunday Times * Utterly convincing ... Watt is also an expert at ratcheting up the suspense ... A superbly crafted sequel in what one hopes will be a long running series * The Times, Thriller of the Month * Heart-stoppingly exciting * i * A compelling thriller that also raises real-world questions about the cost of human lives and what it means to be responsible for one another * Stylist * [A] heart-squeezingly exciting yarn * Daily Telegraph * More than lives up to its promise ... With plenty of action and lots of suspense, The Dead Line is hard-hitting, authentic and, sadly, all too relevant -- Laura Wilson * Guardian, Thrillers of the Month * Holly Watt's first novel, To the Lions, won the CWA Ian Fleming Steel Dagger and this, her second, is even better ... This novel has something for everyone * Literary Review * A rip-roarer of a thriller that sucked me in and wouldn't let go until the finish. Like To the Lions, The Dead Line confronts some of the worst of human nature head on, but also finds hope in the complex heroes who stand against it. In Casey Benedict, we have a brilliant creation who is as relentless in her pursuit of the truth as a helpless group of victims demands. I find myself wishing there were more Caseys in the world -- Gytha Lodge, Sunday Times bestselling author of She Lies in Wait Terrific, hair-raising and profoundly disturbing * Saga * Holly Watt is a master storyteller ... A dynamic, globetrotting thriller with a strong, compassionate heart -- Stephen Mack Jones Superbly entertaining ... This promises to be an outstanding series -- Praise for 'To The Lions' * Telegraph * A first-rate Fleet Street novel ... equally good on the spy-like ploys used by undercover hacks as it is on tensions and teamwork in the newsroom -- Praise for 'To The Lions' * Sunday Times * Sensational! I loved it. Superbly plotted, and what a brilliant series lead! A sure hit -- Praise for 'To The Lions', Clare Mackintosh This fast-paced thriller follows journalist Casey Benedict on a dark trail of murder, political corruption and lies in a well-told tale that grabs you from the very first page -- Praise for 'To The Lions' * i *

Holly Watt is an award-winning investigative journalist who worked on MPs expenses and the Panama Papers. She has written for the Sunday Times, the Daily Telegraph and the Guardian. Her debut, To The Lions, won the 2019 CWA Ian Fleming Steel Dagger and was shortlisted for the Wilbur Smith Adventure Writing Prize and the Capital Crime Amazon Publishing Readers' Awards. @holly_watt 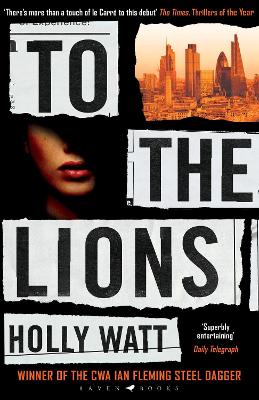