A totally gripping crime thriller with a new cop on the block, one Roy Grace, scarred by a past which surely will be revealed in future books.  His first case for us involves a man buried alive in what appears to be a harmless stag-night prank but turns very sinister indeed.  This is literally unput-downable, with a great twist.  A must-read for all crime addicts.

From one of the great masters of British crime writing comes the stunning first novel in a new mystery series introducing Detective Superintendent Roy Grace It was meant to be a harmless stag night prank. A few hours later four of his best friends are dead and Michael Harrison has disappeared. With only three days to the wedding, Detective Superintendent Grace - a man haunted by the shadow of his own missing wife - is contacted by Michael's beautiful, distraught fiancee, Ashley Harper. Grace discovers that the one man who ought to know Michael Harrison's whereabouts is saying nothing: But then he has a lot to gain - more than anyone realizes. For one man's disaster is another man's fortune...Dead simple... 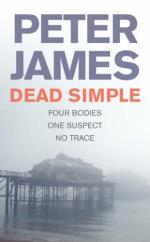