LoveReading View on Vanished Kingdoms: The History of Half-Forgotten Europe

I found this book about states and kingdoms that have had their day in the sun, and then vanished, compelling and very relevant. Norman Davies writes about lost nation states such as Burgundy and Aragon and even the USSR. I was fascinated to read about Alt Clud, the kingdom on the Clyde whose main fortress was on Dumbarton Rock. It was a British kingdom that survived for seven centuries and is now almost quite forgotten except by historians. The United Kingdom is entering its fourth century….will it manage a fifth?

'The past is a foreign country' has become a truism, yet we often forget that the past is different from the present in many unfamiliar ways, and historical memory is extraordinarily imperfect. We habitually think of the European past as the history of countries which exist today - France, Germany, Britain, Russia and so on - but often this actually obstructs our view of the past, and blunts our sensitivity to the ever-changing political landscape. Europe's history is littered with kingdoms, duchies, empires and republics which have now disappeared but which were once fixtures on the map of their age - 'the Empire of Aragon' which once dominated the western Mediterranean; the Grand Duchy of Lithuania, for a time the largest country in Europe; the successive kingdoms (and one duchy) of Burgundy, much of whose history is now half-remembered - or half-forgotten - at best. This book shows the reader how to peer through the cracks of mainstream history writing and listen to the echoes of lost realms across the centuries. How many British people know that Glasgow was founded by the Welsh in a period when neither England nor Scotland existed? How many of us will remember the former Soviet Union in a few generations' time? Will our own United Kingdom become a distant memory too? As in his earlier celebrated books Europe: a history and The Isles , Norman Davies aims to subvert our established view of what seems familiar, and urges us to look and think again. This stimulating surprising book, full of unexpected stories, observations and connections, gives us a fresh and original perspective on the history of Europe.

Norman Davies was for many years Professor of History at the School of Slavonic Studies, University of London, and has also taught at Harvard, Stanford, Columbia, McGill, Cracow, Adelaide, Australian National and Hokkaido universities. He is the author of God's Playground: a History of Poland (1981), the No 1 best-seller Europe: a History (1996), Microcosm: Portrait of a European City (with Roger Moorhouse) and Rising '44: the Battle for Warsaw (date). From 1997-2006 he was Supernumerary Fellow of Wolfson College, Oxford; he is now Professor at the Jagiellonian University at Cracow, an Honorary Fellow of St Antony's College, Oxford and a life member ... 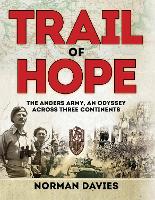 View All Books By Norman Davies