In 140 pages, two masterly popularisers present 140 explanations of the biggest questions in physics - in the form of 10 or so tweets per page. They set themselves the challenge of boiling down what is essential on each subject into sentences of 140 characters, and the results are both entertaining and brilliantly informative. The reader is not patronized and learns something on every page. If only all science writing could be so precise and so economical. Only science writers of a very high calibre could achieve such compression. Marcus Chown - the finest cosmology writer of our day (Matt Ridley) - has known the Dutch writer Govert Schilling for twenty years. Schilling pioneered this very swift form of explanation in a Dutch newspaper, and suggested to Chown that they collaborate on bringing it to a wider audience.

Marcus Chown is the author of the bestselling Quantum Theory Cannot Hurt You, The Never Ending Days of Being Dead and The Magic Furnace. He is the cosmology consultant for New Scientist. He also wrote The Solar System, the bestselling app for iPad, which won the Future Book Award 2011. Govert Schilling has published widely on astronomical topics. Three of his books have been translated into English: The Hunt for Planet X, Evolving Cosmos and Flash!. The International Astronomical Union named Asteroid 10986 Govert after him in recognition of his work on popularizing science.

More About Marcus Chown, Govert Schilling
Add To Wishlist
Buy from our bookstore and 25% of the cover price will be given to a school of your choice to buy more books. 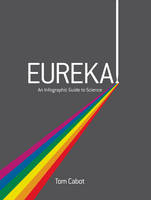 Eureka! An Infographic Guide to Science

Digital vs Human How We'll Live, Love, and Think in the Future

Poison and Poisoning: A Compendium of Cases, Catastrophes and Crimes