Following the Detectives: Crime Fiction's Greatest Investigators and the Real Cities They Inhabit 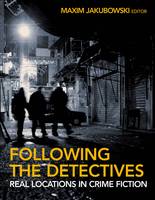 An fascinating, detailed collection put together by our very own crime editor, Maxim Jakubowski. Crime writers, journalists and critics investigate the cities where crime writers have set their books. Wonderful for the literary tourist and a fascinating read for the armchair traveller too.

Whether it be the London of Sherlock Holmes or the Ystad of the Swedish Wallander, Dashiell Hammett's San Francisco or Donna Leon's Venice, the settings chosen by crime fiction authors have helped those writers to bring their fictional investigators to life and to infuse their writing with a sense of danger and mystery. Following the Detectives follows the trail of over 20 of crime fiction's greatest investigators, discovering the cities and countries in which they live and work. Edited by one of the leading voices in crime fiction, Maxim Jakubowski, each entry is written by a crime writer, journalist or critic with a particular expertise in that detective and the fictional crimes that have taken place in each city's dark streets and hidden places. The book includes beautifully designed maps with all the major locations that have featured in a book or series of books - buildings, streets, bars, restaurants and locations of crimes and discoveries - allowing the reader to follow Inspector Morse's footsteps through the college squares of Oxford or while away hours in a smoky Parisian cafe frequented by Inspector Maigret, for example. Aimed at the avid detective fan, the armchair tourist and the literary tourist alike, Following the Detectives is the perfect way for crime fiction fans to truly discover the settings of their favourite detective novels.

What To Read After Following the Detectives: Crime Fiction's Greatest Investigators and the Real Cities They Inhabit