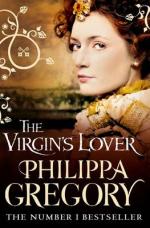 Based on fact but infused with Gregory's own take on history, this is an inspiring and sumptuous novel with Elizabeth I at centre stage. It's full of romance, scheming, intrigue and passion with Robert Dudley a key player in Elizabeth's game of lust despite the fact that of course he was married to someone who, like Elizabeth was no pushover. The characters are well drawn and the storyline spot on.

Elizabeth I has acceded to the throne of England, a position she has waited and schemed for all her life. She is surrounded by advisers, all convinced that a young woman cannot form political judgements. Elizabeth feels that she can rely on just one man: her oldest friend, Robert Dudley. It is soon plain that he is more than merely a friend.

In a house in the countryside waits a very different woman, Amy Robsart – Robert’s wife. She has no taste for life at court and longs for the day when her husband will return home. She has loved him since she was a girl, but now they are adults she hardly sees him.

Meanwhile, the pressure grows for Elizabeth to marry, for it is unthinkable that a queen should rule on her own. Elizabeth’s preference is clear, but he is unavailable. But what if the unthinkable were to happen…

Philippa Gregory blends passion, personalities and politics in this stunning novel of the Tudor court and a country divided.

The Clouds Beneath the Sun