Compelling whodunnit style drama with two main protagonists set in WW II London. The author captures the essence of the era very evocatively, drawing you into the action without hammering the 'historical' setting. Some excellent characters litter the plot, some very typecast, others more unusual and with surprising traits. So well, in fact, is the mood set, that it's hard to break from it once involved..... Excitingly its the first in a new series and we are looking forward to reading the rest.

London, June 1940. When the body of silent screen star Mabel Morgan is found impaled on railings in Fitzrovia, the coroner rules her death as suicide, but DI Ted Stratton of the CID is not convinced. Despite opposition from his superiors, he starts asking questions, and it becomes clear that Morgan's fatal fall from a high window may have been the work of one of Soho's most notorious gangsters.

MI5 agent Diana Calthrop, working with senior official Sir Neville Apse, is leading a covert operation when she discovers that her boss is involved in espionage. She must tread carefully - Apse is a powerful man, and she can't risk threatening the reputation of the Secret Service.

Only when Stratton's path crosses Diana's do they start to uncover the truth. But as they discover Morgan's connection with Apse and their mutual links to a criminal network and a secretive pro-fascist organisation, they begin to realise that the intrigues of the Secret Service are alarmingly similar to the machinations of war-torn London's underworld.

What To Read After Stratton's War

'Laura Wilson's earlier novel The Lover, set in wartime London, was rightly praised for its evocation of place and period, and she is equally successful with Stratton's War. This is not simply a question of period detail ... it is deep in the language of the novel, in the speech of the characters, even in the narrative voice. Everything sounds authentic.'  Heather O'Donaghue, TLS

'If you half close your eyes Bulldog Drummond could bowl into this cracking plot.'  DAILY SPORT 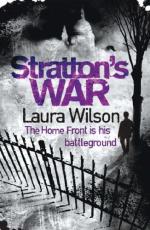