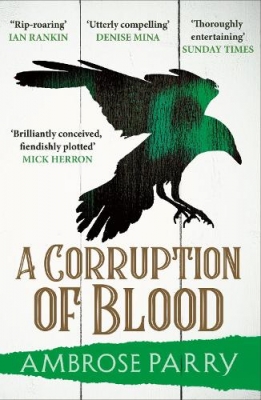 A Corruption of Blood

"This historical mystery is drenched in a menace that reeks of the mid 19th century before bursting into devouring flames."

This compelling and atmospheric mystery set in 1850 Edinburgh beautifully blends fact and fiction. While Will Raven agrees to help a man he detests, Sarah Fisher is intrigued by a woman who has obtained a medical degree. A Corruption of Blood is book three in the Raven and Fisher mystery series written by a husband and wife writing duo Ambrose Parry. You could potentially read this as a standalone but best to start with The Way of All Flesh, followed by The Art of Dying. An absolutely fascinating map had me pouring over the streets of Leith before I started to read. One of the things I love about this series is the balance of facts and real people from history that are weaved through the stories. As stated in the historical note: “the fun is in weaving true elements into a wider fiction, leaving the reader wondering which parts of the story really happened and which are the products of our combined imaginations”. So there is a convincing credibility to this writing, you can escape into the words and just believe. I particularly enjoy the relationship between the two main characters, it’s not an obvious one, yet suits who they are. The social commentary of the times is powerful as it slides its way through the plot. If there are any parts that you suspect might be coming, it is still done in such a way as to surprise. Chosen as a Liz Robinson Pick of the Month, if you open A Corruption of Blood you will find clever, thought-provoking writing, that is as fascinating and captivating as can be.

A Corruption of Blood Synopsis

A Raven and Fisher Mystery: Book 3

Dr Will Raven is a man seldom shocked by human remains, but even he is disturbed by the contents of a package washed up at the Port of Leith. Stranger still, a man Raven has long detested is pleading for his help to escape the hangman.

Back in the townhouse of Dr James Simpson, Sarah Fisher has set her sights on learning to practise medicine. Almost everyone seems intent on dissuading her from this ambition, but when word reaches her that a woman has recently obtained a medical degree despite her gender, Sarah decides to seek her out.

Raven's efforts to prove his former adversary's innocence are failing and he desperately needs Sarah's help. Putting their feelings for one another aside, their investigations take them to both extremes of Edinburgh's social divide, where they discover that wealth and status cannot alter a fate written in the blood.

The ambience of mid-nineteenth-century Edinburgh is well captured and makes for a gripping read. The authors are astute observers of human behaviour and outlook. The three novels in the trilogy are clearly well researched and shine a light on the cruelties, injustices and inequalities of the period described . . . Based on some actual events it's more than mere entertainment -

Another brilliant evocation of mid-nineteenth century Scotland, this series just gets better and better. The backstory of the characters, loves, careers and ambitions, is as riveting as the mystery . . . A mix of drama, romance and thriller -

Praise for the series: Parry's Victorian Edinburgh comes vividly alive - and it's a world of pain -- VAL McDERMID

Brilliantly conceived, fiendishly plotted and immaculately realised, these thrillers pull off the most difficult double-whammy of all: beneath blood and butchery so real they almost stain the pages lie both heart and soul . . . Wherever Parry takes them, I'll follow -- MICK HERRON

A rip-roaring tale of murder amid the medical experiments of 19th-century Edinburgh. The book brings both city and period to colourful life and is a joy to read -- IAN RANKIN -Guardian

Menacing, witty and ingeniously plotted, Ambrose Parry's debut draws you into the dark heart of nineteenth-century Edinburgh and won't let you go until the final page -- S.J. PARRIS

Gleeful, romping . . . The fog and stench of Edinburgh's Old Town definitely jump off the page . . . The central relationship between loveable rogue Raven and proto-feminist Fisher is the beating heart of The Art of Dying. Both characters are drawn with real empathy and nuance, and their complicated feelings for each other drive the book as much as the smart storylines. A great piece of storytelling - Big Issue

An astonishing debut. The dark and dangerous past is brought thrillingly to life. I can't wait to read more of Raven and Sarah -- MARK BILLINGHAM

Ambrose Parry is a pseudonym for a collaboration between Chris Brookmyre and Marisa Haetzman. The couple are married and live in Scotland. Chris Brookmyre is the international bestselling and multi-award-winning author of over twenty novels. Dr Marisa Haetzman is a consultant anaesthetist of twenty years' experience, whose research for her Master's degree in the History of Medicine uncovered the material upon which this series, which began with The Way of All Flesh, is based. The Way of All Flesh was shortlisted for the McIlvanney Prize for Scottish Crime Book of the Year and longlisted for the Theakston Old Peculier Crime Novel of the Year Award. The Art of Dying is the second book in the series. @ambroseparry

More About Ambrose Parry
Add To Wishlist
Buy from our bookstore and 25% of the cover price will be given to a school of your choice to buy more books.