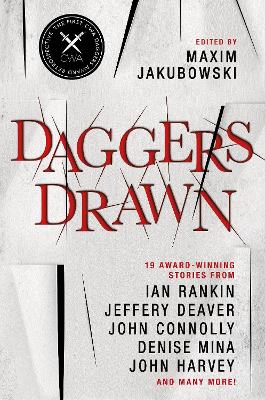 "A seriously top-notch collection of stories from some of the winners of the Crime Writers’ Association Short Story Dagger."

Dive in and discover 19 winning short stories by some of the greats in the crime writing world. You can sink in and totally immerse yourself in the writing, or pick and choose at your leisure. The Crime Writers’ Association (CWA) was founded in 1953, and they have run their annual awards, The Daggers, since 1956. Take a look at the shortlists of each Dagger and you are set up with a beautifully meaty reading list, the Short Story Dagger is no exception. Maxim Jakubowski, the current chair, has assembled this collection and as he declares in his introduction: “Every story a winner!”. The first, Swiftwing 98 by Peter O’Donnell in 1985 was from a time when the Short Story Dagger had to submitted and include certain ingredients. He had to work in a bottle of champagne, a cryptic message on a micro computer screen, a beautiful blonde Hungarian pianist and Victoria Station, and it is fascinating to see how these feature in the story. Maxim explains that not long after, the rules changed, and the award was given to what was judged to be just the best crime short story of that year. Particular stand outs for me were the amusing intrigue of Herbert in Motion by Ian Rankin, the slicing horror of the Dummies’ Guide to Serial Killing by Danuta Reah, and the heartbreak of Martha Grace by Stella Duffy. Chosen as one of my Liz Picks of the Month, Daggers Drawn is a perfect gift for any crime fiction lovers and short story aficionados out there.

Maxim Jakubowski has edited all the great names in crime fiction and stories from his anthologies have won the CWA Dagger six times. Now he has collected 19 Dagger award-winning stories in one volume, making it the first retrospective deep dive into the CWA's archive of Dagger Award winners.

Edgy, twisted and disturbing, Daggers Drawn is a visceral and thrilling collection showcasing the very best modern crime fiction has to offer.

More About Maxim Jakubowski
Add To Wishlist
Buy from our bookstore and 25% of the cover price will be given to a school of your choice to buy more books.