An intense and piercing fast-moving political thriller set in Iceland.

With short fast-moving chapters this is a piercing and riveting political thriller. Sitting within a time period of just over two weeks, former aid worker Ursula finds herself in deep water when she becomes Minister for the Interior in Iceland. Author Lilja Sigurdardottir and translator Quentin Bates team up again after the successful and fiercely intense Reykjavik Noir trilogy which I absolutely adored. The writing here is just as smart and powerful with dirty politics and corruption leading the charge and an otherwordly feel slinking around in the background. A number of characters are introduced, from Ursula who takes a high-profile role in government, to driver and bodyguard Gunnar, and cleaner Stella. A picture slows builds with a teetering edge of tension remaining in place throughout. I hovered on the edge of knowing and understanding, my focus sharp and waiting for what was to come. In summary, Betrayal is an edge-of-your-seat political thriller just brimming over with attitude.

Burned out and traumatised by her horrifying experiences around the world, aid worker Ursula has returned to Iceland. Unable to settle, she accepts a high-profile government role in which she hopes to make a difference again.

But on her first day in the post, Ursula promises to help a mother seeking justice for her daughter, who had been raped by a policeman, and life in high office soon becomes much more harrowing than Ursula could ever have imagined. A homeless man is stalking her - but is he hounding her, or warning her of some danger? And why has the death of her father in police custody so many years earlier reared its head again?

As Ursula is drawn into dirty politics, facing increasingly deadly threats, the lives of her stalker, her bodyguard and even a witch-like cleaning lady intertwine. Small betrayals become large ones, and the stakes are raised even higher...

What To Read After Betrayal

An easy and compelling read and meaning as the reader I always wanted to know 'What happens next'. A great book, not too political and with some twists.

The story focusses on Ursula, previously a world aid worker who has returned to her home country of Iceland. What she has witnesses has hardened her against any feeling, including to her husband and children.

Ursula is offered a job of her dreams - Interior Minister. Apparently with no political loyalties she would be the perfect person for the role. She makes a promise on her first day and the story develops around events connected with that.

What follows is an easy and compelling read and always wanting to know 'What happens next'. The chapters are short (121 of them).

This was a different style of book for me and I am pleased I have read it. 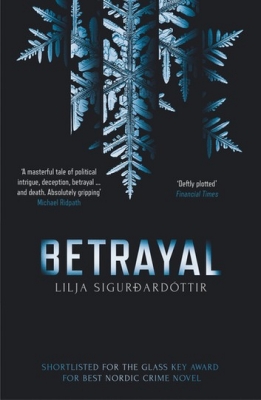