‘Cricket is an Indian game accidentally discovered by the English,’ it has been said. Today, the Indian cricket team is a powerful national symbol, a unifying force in a country riven by conflicts. But India was represented by a cricket team long before it became an independent nation.

Drawing on an unparalleled range of original archival sources, Cricket Country tells the extraordinary story of how the idea of India took shape on the cricket pitch in the age of empire. Conceived by an unlikely coalition of imperial and local elites, it took twelve years and three failed attempts before the first Indian cricket team made its debut on Britain’s playing fields in the Coronation summer of 1911.

This is a tale with an improbable cast of characters set against the backdrop of anti-colonial protest and revolutionary politics. The team’s captain was the embattled ruler of a powerful Sikh state. The other team members were chosen on the basis of their religious identity. Remarkably, two of the cricketers were Dalits. Over the course of their historic tour, these cricketers participated in a collective enterprise that highlights the role of sport in fashioning the imagined communities of empire and nation.

As you get pulled into the book, there is melodrama, rioting, political manoeuvring and sneering condescension in a tight partnership with nauseating sycophancy, drunkenness, sporting skulduggery and back-stabbing. - Ruchir Joshi, India Today

Remarkably researched... The account of the tour is engrossing - Uddalak Mukherjee, Telegraph India

Cricket Country ... is as much about the country as it is about cricket. It is a book of history that uses cricket as a framing device... [It] offers ... fascinating insights. - Salil Tripathi, Mint

More than a hundred summers ago, an All-India cricket team toured England for the first time. Prashant Kidambi's wonderful account of that pioneering team and its bid to represent a sub-continent is the story of a motley band of cricketers calling India into being. Through the history and itinerary of this would-be 'Indian' team, Kidambi cunningly explores the meaning of belonging and representation in British India. Cricket Country s easily the most enjoyable non-fiction book you'll read this year. - Mukul Kesavan, author of Men in White: A Book of Cricket

This magnificent book recreates the forgotten story of the first All India cricket team, which toured England in 1911. Featuring Brahmins and Dalits, Parsis and Muslims, and led by a Sikh, this team was forging the idea of India on the sporting field while Mohandas K. Gandhi was still an expatriate in South Africa. It is a fascinating tale, and Prashant Kidambi tells it beautifully. He juxtaposes vivid quotations from primary sources with deft sketches of personalities, close accounts of cricket matches won and lost with thoughtful meditations on imperialism and nationalism. Scholars, students, history and sports buffs, will all find reading Cricket Country an enormously educative as well as hugely enjoyable experience. I certainly did. - Ramachandra Guha, author of Gandhi: The Years That Changed the World, 1914-1948

With a nod to Edmund Blunden's famous book in his title, Kidambi tells the little-known tale of the first Indian cricket team to tour England, in the summer of 1911. This may well become a classic to rank alongside the very best of cricket books. - Mike Sansbury, The Grove Bookshop

A serious contribution to the literature on Indian cricket history and cricket's position in the British Empire. Beyond that, it is an engrossing and thoroughly engaging read. - Neil Robinson, MCC Magazine

Meticulously researched and impeccably sourced, this is a first-rate book of serious history that also happens to be about cricket... A well written and important book on a little-known tour. - Richard Lawrence, The Cricket Statistician

The work that has gone into Cricket Country is astonishing... there is still a particular pleasure to be had from the experience of reading a book as well edited and produced as this one... Cricket Country goes well beyond the usual parameters of cricket writing... for those who are interested in where the Indian game has come from it really is a 'must read'. - Martin Chandler, Cricket Web

a formidable piece of scholarship that recreates the time in staggering detail. - Sharda Ugra, ESPNcricinfo

The book is 10 years' work and it shows, in its elegance and detail. By going somewhere so unexplored, and producing something so original, Kidambi lays claim to being a Rahul Dravid among cricket historians. - Gideon Haigh, The Australian

Kidambi has produced a masterly piece of sports scholarship, fit to be considered alongside books on more weighty historical subjects. The depth of his research is extraordinary and his knowledge of Indian history [...] is just as important as his knowledge of cricket ... this is a terrific book. - Richard Whitehead, The Cricketer

Cricket Country explores both the history of imperial British cricket in India and colonial Indian cricket in Britain, as well as cricket as a vehicle for nation-building, cultural diplomacy, imperial pedagogy and masculinity, but at its heart tells the tale of a group of men in search of sporting glory... Prashant Kidambi traces the story with great detail, which will delight cricket enthusiasts. - Shompa Lahiri, BBC History Magazine

Kidambi's forensic eye and vast array of sources make for a ... nuanced revisionism. Not that he pulls his punches. - Shomit Dutta, The Times Literary Supplement

5* review: This book is an engagingly written and deeply researched social history of the last days of imperial Britain, and the first days of Modern India. The 1911 tour is used as a framing device through which the author explores the ties that bound the colony together and the slow beginnings of an Indian nationhood. It is a history book, not a cricket book, and all the better for it. - Theo Barclay, The Daily Telegraph

Prashant Kidambi tells the intriguing story of the first All-India , and largely forgotten, team to reach British shores ... Kidambi's achievement is to retrieve from obscurity the backbone of the team, including a Dalit, or low-caste, bowler Palwankar Baloo, and Muslim cricketers from the Islamic educational centre of Aligarh. - James Lamont, The Financial Times 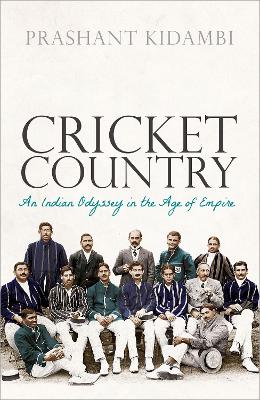 Prashant Kidambi is Associate Professor in Colonial Urban History at the University of Leicester. After completing postgraduate degrees in History at the Jawaharlal Nehru University in New Delhi, he was awarded a Rhodes Scholarship to study at the University of Oxford. Kidambis research explores the interface between British imperialism and the history of modern South Asia. He is the author of The Making of an Indian Metropolis: Colonial Governance and Public Culture in Bombay, 1890-1920 and the editor of Bombay Before Mumbai: Essays in Honour of Jim Masselos.