A Deadly Legacy German Jews and the Great War

With compelling clarity Tim Grady demonstrates how “Germany’s path through the First World War not only destabilised German politics and society; it also opened people’s minds to the power of violence and destruction”, which – ultimately - created the conditions that led to the rise of National Socialism and the genocide of 6 million Jews. This pioneering work shows that since German Jews stood together with non-Jews in defending their country, they contributed to creating these conditions. They were “joint protagonists”, with some 100,000 Jewish soldiers serving in the German military, and many being passionate patriots, particularly supportive of Germany’s desire to colonise the East, for example. But, at the same time, and fuelled by the emerging “nonchalant attitude towards mass death” and a poisonous fear of “the other”, Jewish citizens found themselves on the wrong side of a unifying Imperialist ‘them and us’ division, and the stab-in-the-back myth began to thrive.

Drawing on a breadth of fascinating sources, this is an engrossing and important study - rigorously researched, and written with vigour. ~ Joanne Owen

A Deadly Legacy German Jews and the Great War Synopsis

A groundbreaking reassessment of the crucial but unrecognized roles Germany's Jews played at home and at the front during World War I This book is the first to offer a full account of the varied contributions of German Jews to Imperial Germany's endeavors during the Great War. Historian Tim Grady examines the efforts of the 100,000 Jewish soldiers who served in the German military (12,000 of whom died), as well as the various activities Jewish communities supported at home, such as raising funds for the war effort and securing vital food supplies. However, Grady's research goes much deeper: he shows that German Jews were never at the periphery of Germany's warfare, but were in fact heavily involved. The author finds that many German Jews were committed to the same brutal and destructive war that other Germans endorsed, and he discusses how the conflict was in many ways lived by both groups alike. What none could have foreseen was the dangerous legacy they created together, a legacy that enabled Hitler's rise to power and planted the seeds of the Holocaust to come. 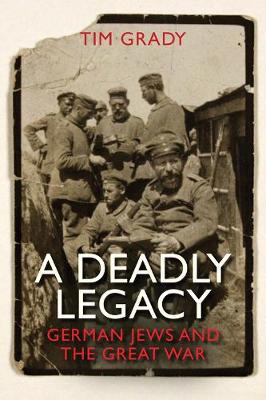 Shortlisted for the Wolfson History Prize 2018 Tim Grady is reader in modern history, University of Chester, and author of The German Jewish Soldiers of the First World War in History and Memory. He lives in Merseyside, UK. On A Deadly Legacy: German Jews and the Great War:  Researching the history of German Jews in the First World War has taken me to archives in Germany, the United States, Israel and Britain. It has been an incredible privilege to piece together the traces of individual lives and to discover their wartime hopes and aspirations. It is these stories that ...