We Were the Salt of the Sea

Part of the Detective Morales Series

LoveReading View on We Were the Salt of the Sea

What a beautifully written, captivating, and soulful read this is. Detective Sergeant Joaquin Morales, newly transferred, begins to investigate the death of a women found in fishing nets out at sea. Catherine Day leaves Montreal for a remote fishing village, looking for answers about her birth mother. The Gaspe Peninsula sits centre stage in the story, remote, set apart, and yet intimately connected to the sea. I immediately fell headlong into the story, the seamless translation encourages the words to join together, creating a vividly stunning picture. Catherine tells her own tale, having such personal access allows a connection, yet she still feels hidden from view. Other peoples thoughts tumble freely over the pages, yet they belong, they anchor the story. I felt that the author Roxanne Bouchard has a profound connection to the sea, she loves it, respects it, yet the immense power simmers, occasionally rages in the background. I quite simply adored ‘We Were the Salt of the Sea’, refreshingly different, unpredictable, yet deeply rich and touching, it became a part of me.

We Were the Salt of the Sea Synopsis

As Montrealer Catherine Day sets foot in a remote fishing village and starts asking around about her birth mother, the body of a woman dredges up in a fisherman's nets. Not just any woman, though: Marie Garant, an elusive, nomadic sailor and unbridled beauty who once tied many a man's heart in knots. Detective Sergeant Joaquin Morales, newly drafted to the area from the suburbs of Montreal, barely has time to unpack his suitcase before he's thrown into the deep end of the investigation. On Quebec's outlying Gaspe Peninsula, the truth can be slippery, especially down on the fishermen's wharves. Interviews drift into idle chit-chat, evidence floats off with the tide and the truth lingers in murky waters. It's enough to make DS Morales reach straight for a large whisky... Both a dark and consuming crime thriller and a lyrical, poetic ode to the sea, We Were the Salt of the Sea is a stunning, page-turning novel, from one of the most exciting new names in crime fiction.

We Were the Salt of the Sea Reader Reviews

The sea is calling and draws us in. Full review

Lyric ode to the sea wrapped up in a dark crime novel of a woman's search for her birth mother and the mysterious death of another. Full review

A novel which stirs many emotions, turns many pages and leaves you wishing the author hadn't concluded it so early. Full review

Sorry but not recommended. I did not find the style easy to read or get into repeating phrases were distracting and stopped the flow. Disappointed. Full review

Christ in a chalice a beautiful written book that will to make you fall in love with the sea. Full review

Even if this book is one you would not normally read, I would recommend that you try it. It really is a lovely book. Full review

I really loved this book. Please hurry up and translate the rest of Roxanne Bouchard’s novels into English so that I can read them. Full review

The sea permeates every aspect of this story, forming the characters, their loves and lives. As the complexities unroll, what was impenetrable to an outsider begins to take hold of them as well. Full review

It’s a beautifully written book that isn’t just about the story but about the people, the place they live and their love for the sea. Full review

Mystical crime novel, a tight knit community, daughter looking for her mother, and a body drenched up in the fishing nets. Full review

One of the best books I’ve read this year so far!!!! Full review

An interesting read. It took me quite a while to get into it, but I persevered and I am glad I did - I ended up wanting to stay up to finish it. Full review

We Were the Salt of the Sea is an illuminating and enthralling crime thriller that is also a love letter to the sea. This novel will captivate the reader. Full review 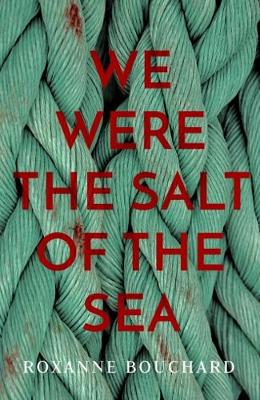 Ten years or so ago, Roxanne Bouchard decided it was time she found her sea legs. So she learned to sail, first on the St Lawrence River, before taking to the open waters off the Gaspe Peninsula. The local fishermen soon invited her aboard to reel in their lobster nets, and Roxanne saw for herself that the sunrise over Bonaventure never lies. We Were the Salt of the Sea is her fifth novel, and her first to be translated into English. She lives in Quebec

View All Books By Roxanne Bouchard